We had a bad oil leak.  We thought it came from the adapter from the engine to the oil cooler hoses.

So we made a new adapter.  Not only because the leak but also because the original adapter had a thermostat we wanted to get rid of. 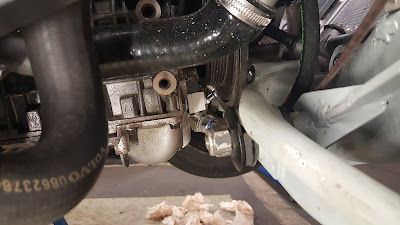 It's the squarish shiny piece in right in the middle of the picture.

The bad thing is that it continued to leak. And it is close to impossible to get to see were from the oil is coming.  At a first look, it's comes from the flange between the engine and the adapter.  But after thorough cleaning, and squeezing someones head into position, close to the fan belt, while an other one started the engine,  it was indeed possible to see that adapter was NOT leaking.

However, it was still impossible see the actual leak.

But, a $50 high tech USB inspection camera from Biltema, made it possible: