﻿We have created Salt Slush Racing.

Here's a midsummer recap:﻿
We 've had our Land Speed Amazon approved by SCTA (with a few remarks, that it now fixed by Erik Hansson) 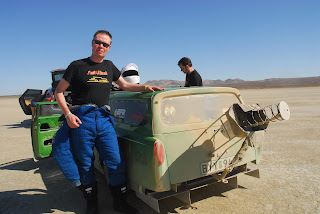 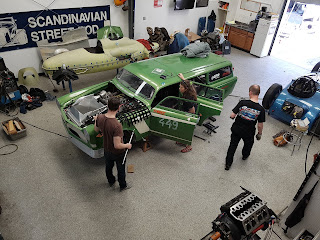 Salt Slush Race Team went over to US to adjust the car after the Rookie race at El Mirage
We took the Amazon to the empty desert again. Only the wind was whispering…before our turbocharged tones broke the silence.
So what's the Next Step?
Answer:
We're heading for Bonneville Speed Week in August this year.
But right now?
We're in the final planning phase. So far, we've managed to get hold of four Good Year land speed race tires from Cowboy Tires. We've ordered two pair of 5 layer race suits from DJ Safety and Erik Hansson will help us with some final technical details. And yes, we've all booked our flights...
﻿

A Square Body of many usages! Have no doubt !

As Hakan wrote in an earlier blogg...

A heatwave is pounding on Gothenburg . By Nordic standard it's an intensive heatwave. Swedes are not too familiar with high temperature. They basically go nuts. They raise hell, set sails, get drunk, complains or dream effortless with open windows.

To avoid all that, my Mother ended up as a hell raising, drunk sailor, going nuts who effortlessly dreams about various complaints.

We spent last Sunday running errands and doing her shopping.

What could be a better transportation than a Big Block Squarebody? A perfect vehicle for daily shopping, and light transportation if you crave style.

Here's why; the brilliant first owner, who ordered this crown-of-creation pick-up truck, clicked in the the double tank option.

On top of this I have, during the winter installed a Sniper fuel injection which improved the fuel consumption from a very solid single digit mpg to two digit mpg. It's now a strong eco cruiser now ! 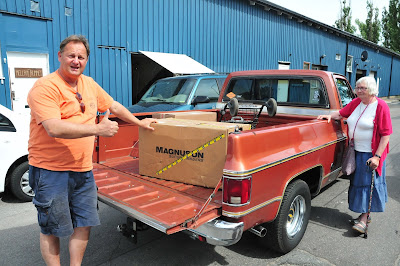 Since our racing business is developing, we had to squeeze in a delivery of a Magnuson Supercharger kit to a happy (Camaro) Customer. Luckily, my Mother's walker managed to cooperate with The Kit.

Posted by saltslushracing at 12:04 PM No comments:

What do you need and what do you do, when you have friends who're bouncing between heaven and hell or demonstrate an ambivalent and fragmentized idea of what to develop life with?

When Love Peace and Understanding are provided via family and friends, you start to search for more or maybe other … stuff(?)

Let's try to approach this from a scientific perspective, with Maslows Pyramid of Needs.

Let's assume that basic needs are all in place. Then the whole riddle will circle around if it's a psychological need or self-fulfilling need. That specific question was propelling around Marcus this very day when he went out to hunt for completion of the Maslow Pyramid of Needs via a tractor. Not just any Tractor. 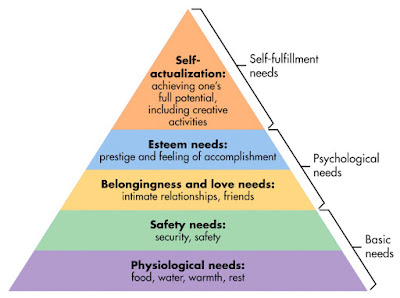 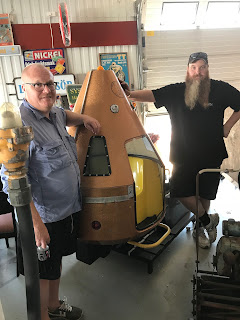 Marcus and Säcken discuss pros and cons of various things.

Could maybe a space shuttle, developed at Säckens Retro in Mellerud, Sweden, be a possible alternative ? The answer is no, even if it was  Gold Metallic Flake the need were not meet/served enough.
Marcus was humming fly me to the moon ...but still, no. 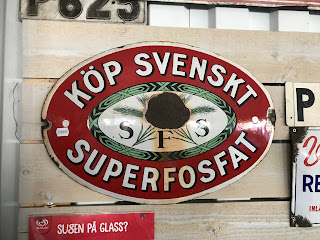 Some in between entertainment from Säckens Retro 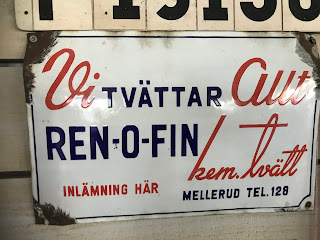 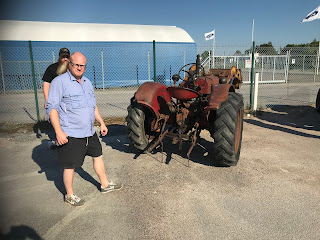 Now it starts to get serious. Maybe, Maybe not... 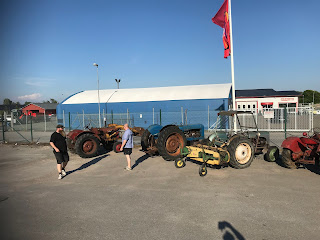 So many choices, so many decisions. Life's hard. 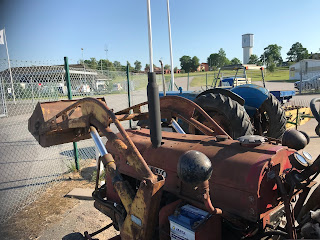 Logical first choice, an old and beaten Tractor, but with a front loader. 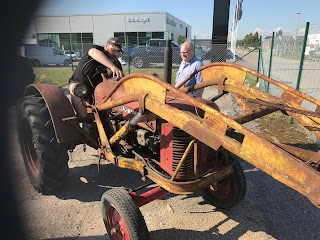 Look! It even works … You just need to do it the right way… 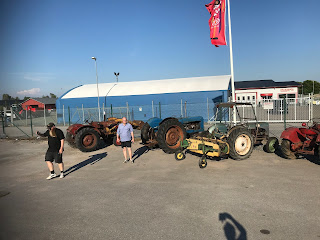 Let's think. Let's evaluate… Marcus took some minutes in the search for his inner soul and needs and found that he always wanted a Grålle (Masey Ferguson). 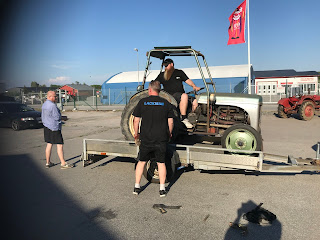 Taaa daaaa !!! Loaded and soon in a Garden close to You ! 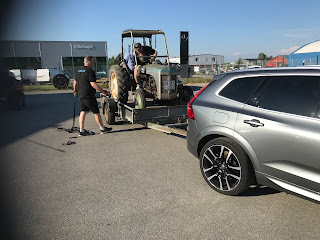 Nice combo. State of the art from two different areas.
Now it's time to conclude what needs can Grålle take car off.

Epilogue:
Belongingness. It's not the same as the love from your family, but the Grålle Tractor confirms your belongingness to a group of people who...easily would spend a fortune on idiotic and for others, not understandable stuff.

Who has the mental strength to lead and not just follow.

Self actualization creativity achieving full potential...YES YES spot on, on a level worthy a spoiled Millennian.

All in all, the Grålle is a homerun that shortcuts all the tricky achievements you can reach via Yoga, studying, meditating and life long wisdom…

In short, Marcus has arrived, he's at ease. 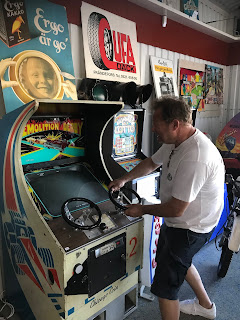 What I did, when not supporting Marcus decision process? I played demolition derby from a time before airbags. 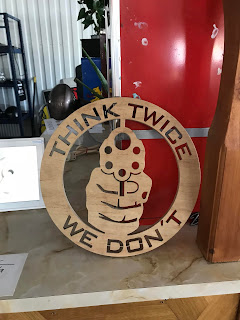 Remark: At Säcken you pay what you buy! Yes, there's a reminder. 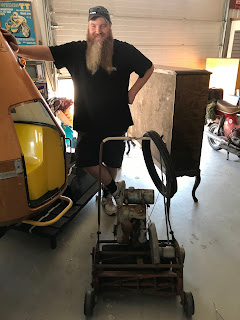 Finally, The Man, The Myth, The concept.
Säcken- If you're in the search for cool stuff. Call him 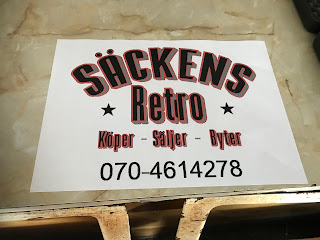 ﻿
Posted by saltslushracing at 12:25 PM No comments:

Hang 'em high. Bring them down. Aim for speed. It's summer time at latitude 57!

A heatwave is pounding on the workshop door. By Nordic standard it's an intensive heatwave. Swedes are not too familiar with high temperature. They basically go nuts. They raise hell, set sails, get drunk, complains or dream effortless with open windows.
That's the Nordic community, with few exceptions.
While all this is going on and the workshop doors are slammed by summer breeze…. 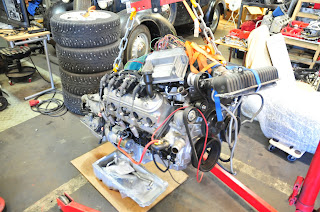 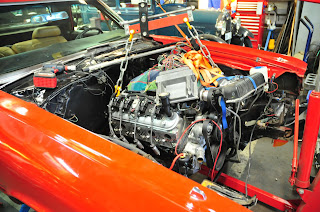 The sun is blazing but Anders is lowering his modified power pack down to a  safe heaven. To a place where the Beast can provide….Power. 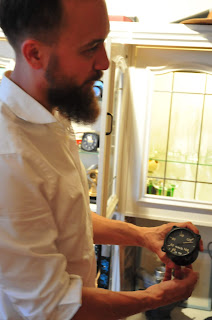 Meanwhile, Annikas' white german asparagus had to consumed. Couldn't wait. Even on a Thursday. In addition, we enjoyed Ragnar, proud as a pilot, presenting a speedometer worthy his supersonic soon-to-be, low sniffing Saab.
Yes. It's a 2-Stroke. A wild one.
Besides. The asparagus was good.The beer was cold.
Summary: All good on the urban roof top. 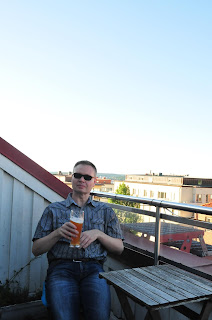 Anders, over the hills and (not so fuck'n) far away.

Following short text might be confusing and complicated to some people, even more strange to others people and totally incomprehensible to some other people.

If you're a sensible person who cannot cope with illogical reasoning you better stop reading now.  For your own good. For your mental health.

Here we go.
As you know we're really spending our last dime on making our Landspeed dream come true and we're ready for Bonneville Speed Week. We'll be there with our Amazon. We're into the final planning and exited to say the least. A lot of things still needs to be solved. Tires, Tailor made 5 layer race suite etc. etc.

But still, in order to not get too stressed, we all try to calm down with more private projects of rather complicated nature. Carina and I are working on our Ardun V8 (converting an old Ford flathead V8 to an OHV Hemi V8), while Anders is working on a LS engine swap (with Magnuson Supercharger) in his El Camino. Magnus is building a old school dragster and Kalle is trying to get his boat fast again. But make no mistakes, we're always open for a turbo or supercharger discussion.  Makes sense? Nope. Fun & Knowledge building? You bet! 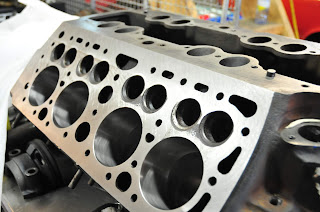 Here's what's going on with the Ardun V8 engine to-be. I've milled off the relives, the cylinders are bored and honed to dimension. Looks good. Feels good. 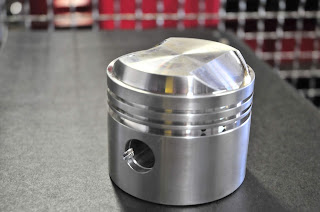 Ross in Califorina made tailor made pistons which fits the 4 inch stroke flathead with Ardun heads and suitable compression ratio. 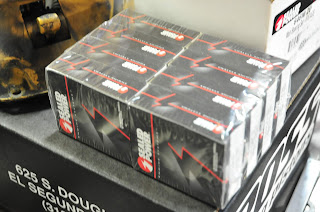 When in US, I drove over to Egges Machinery and bought new bearings. And yes, they had 2nd oversize main and crank bearing for the 255 Flathead on the shelves. I like that. How difficult can it be? 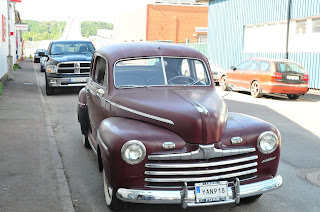 Outside the -46 is waiting for a new and stronger machine.
Summary: Keep a couple of projects going at the same time. It makes you more productive. As a bonus, there's no time to dwell around do nothing and that keeps you alert on the verge to crazy.