They told us already from the beginning. They warned us about her. Becuase she's bad to the bone. She's evil and got no remorse. We're talking about Mother Nature.

Experienced Landspeed Racers told us that there was this Trinity. Something that was hard to understand but would be obvious to us sooner or later. They explained that technology, driving skill and nature was all involved in each race. We've looked at those guys for a couple of seconds and went back to think about cam timing, turbo matching and aerodynamics and other important stuff.

We're now enlightened. We've travelled from Sweden to L.A. We've picked up our Green Burb In Ventura, we traveled from L.A area to Bonneville Speed Week and we were tagged, prepared, and ambitions, because the 449 Amazon is calibrated and Cobra fast. We were a bit anxious because we knew that we were about to go fast on the salt. 200 mph was not out of hand.

Then she showed up. In bad mood. She literally rained on our parade. Mother f*** Nature.

Here's what happened; The Friday before the Saturday when it was all about to get going, the rain started falling heavily. Consequently, the salt bed was flooded, and the race postponed for three days. Then suddenly, on Tuesday the race was on! But only on track out of four was open. 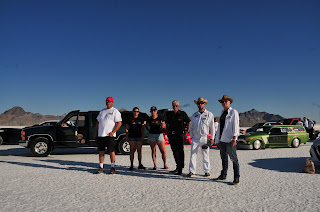 With only one track opened….we waited under the blistering sun for the moment of truth. 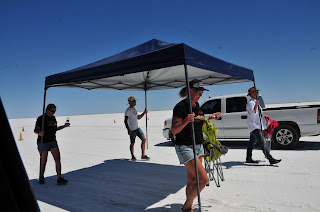 We carried our own shadow for ten hours and finally… 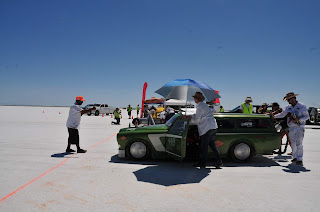 ...it was our turn. Our slot. Our time to shine and perform. After approximatly 300 meter / yards we suffered an electrical problem, the engine stalled and we quitely rolled off the track, well aware of the fact the there was no time for a second run.
Yes, we restlessly drove around at the shortend 1 mile rookie track at 150mph a couple of times, after we fixed the electrical problem just because we could, but… 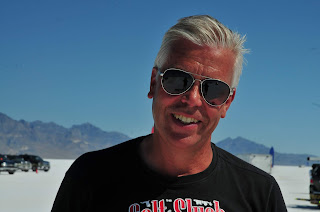 ...except for one hell of a sun tan, the only positive outcome of the Bonneville Speed Week 2019 is deeper understadning of the land speed racing, a kind of respect for how whimsey Mother Natur can be and the virtue of waiting.

But we'll be back!