The 302 emblem is a promise and a statement. 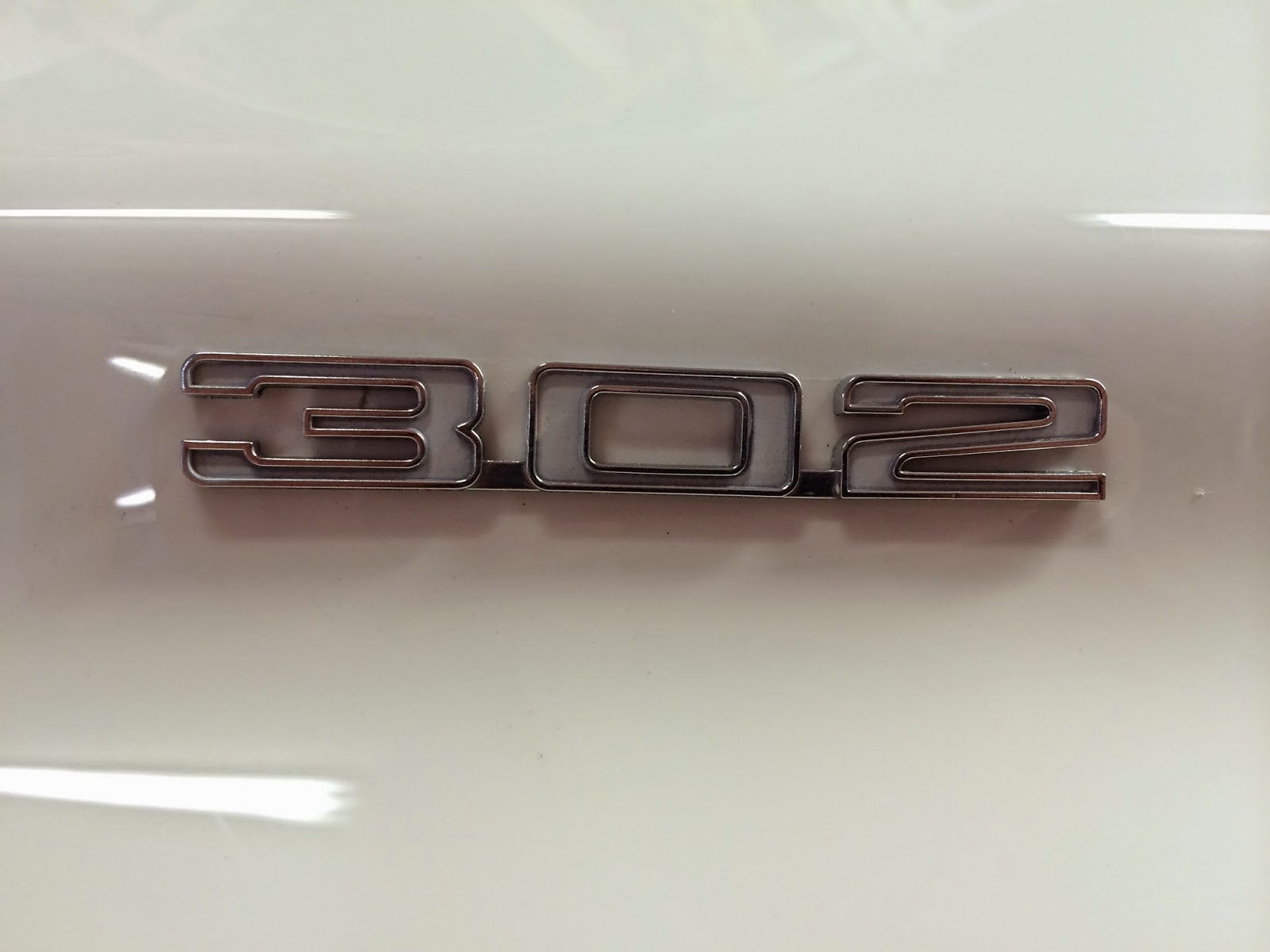 As I told you before the 302 in the Z28 got serious toothache combined with strange noises which made me take out the engine and give it full treatment. Which means balance and assemble with love and attention to details. This was all good and fun to do between all our plans and work with the SSR Amazon.
It pays off to allow things to take time. To check things over and over again to avoid mistakes. 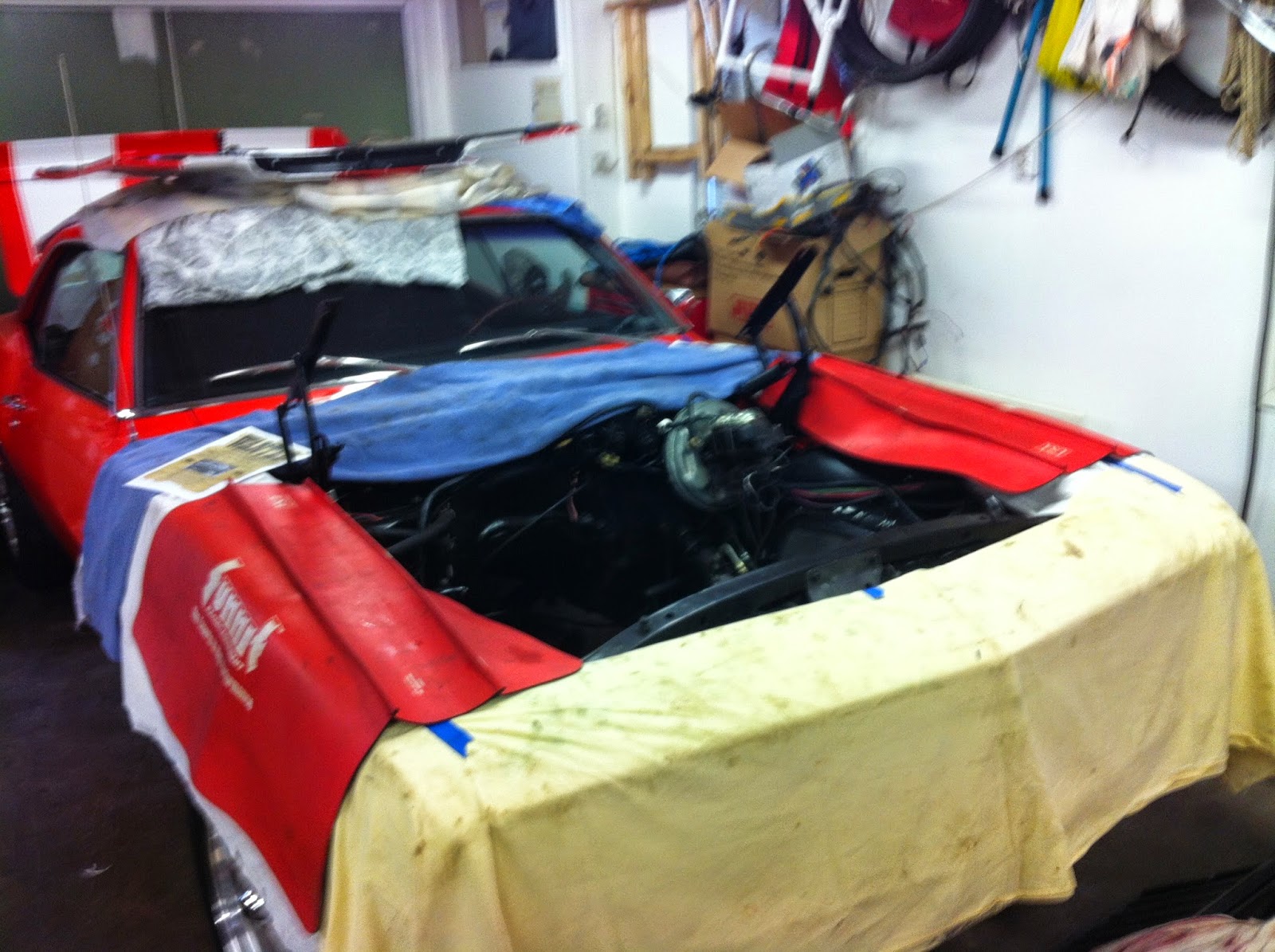 Since the -69 has a very nice paint job I tried to protect it with double blankets, sheets and tape on all corners and edges just to make it all worked out well.
The engine was in the 80's restored by the late Bagarn who, together with Birgitta, moved to Florida 1985 and started Autoshop http://www.autoshopracingengines.com.
When I bought the car 15 years ago I got a lot of receipts from Autoshop / Bagarn in Umeå and numerous good stories from the owner which own the car at that time, Robin L in Gargnäs 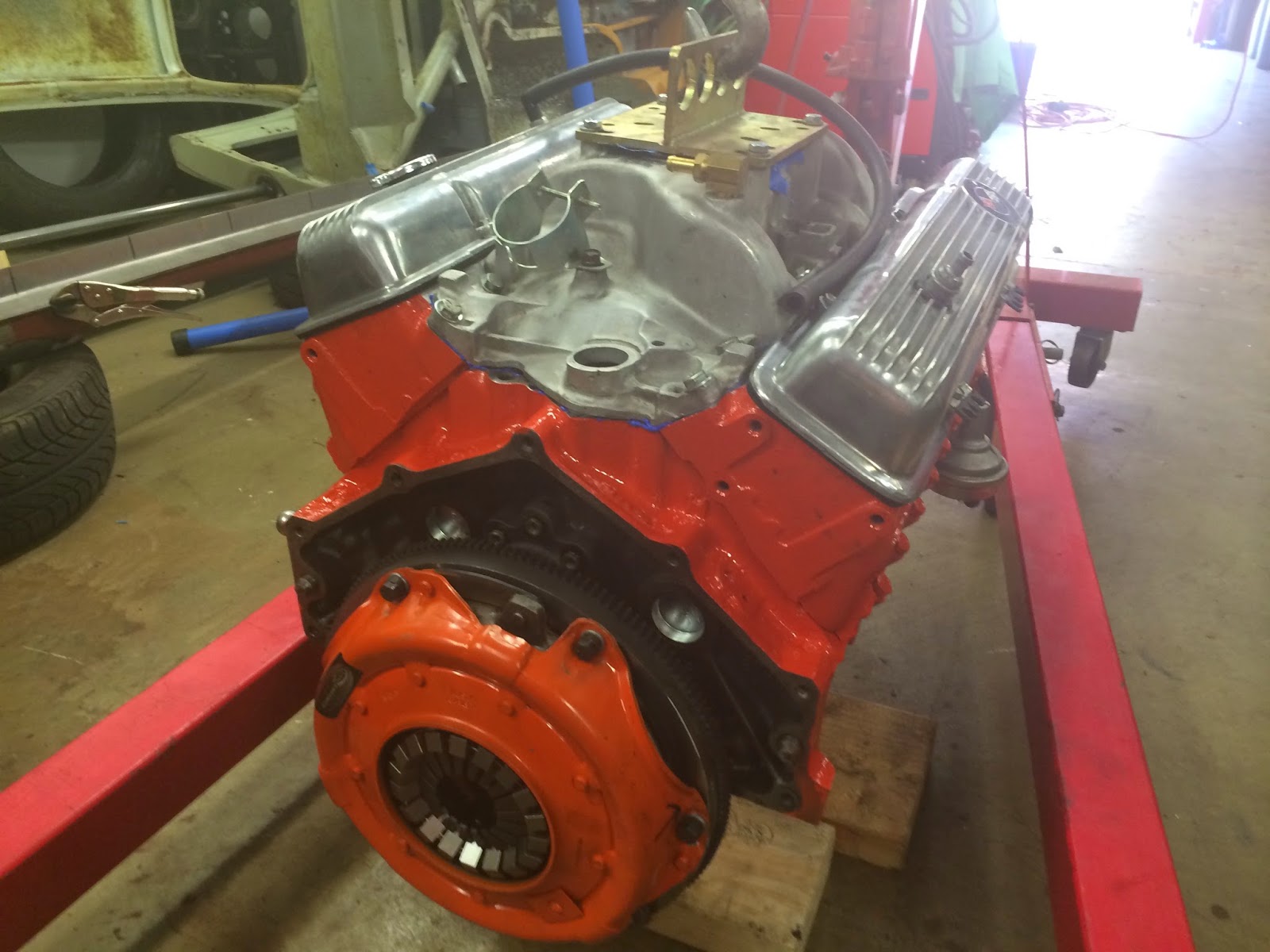 New clutch, Centerforce dual friction will secure a good hook up. Earlier I've had some problems with this. 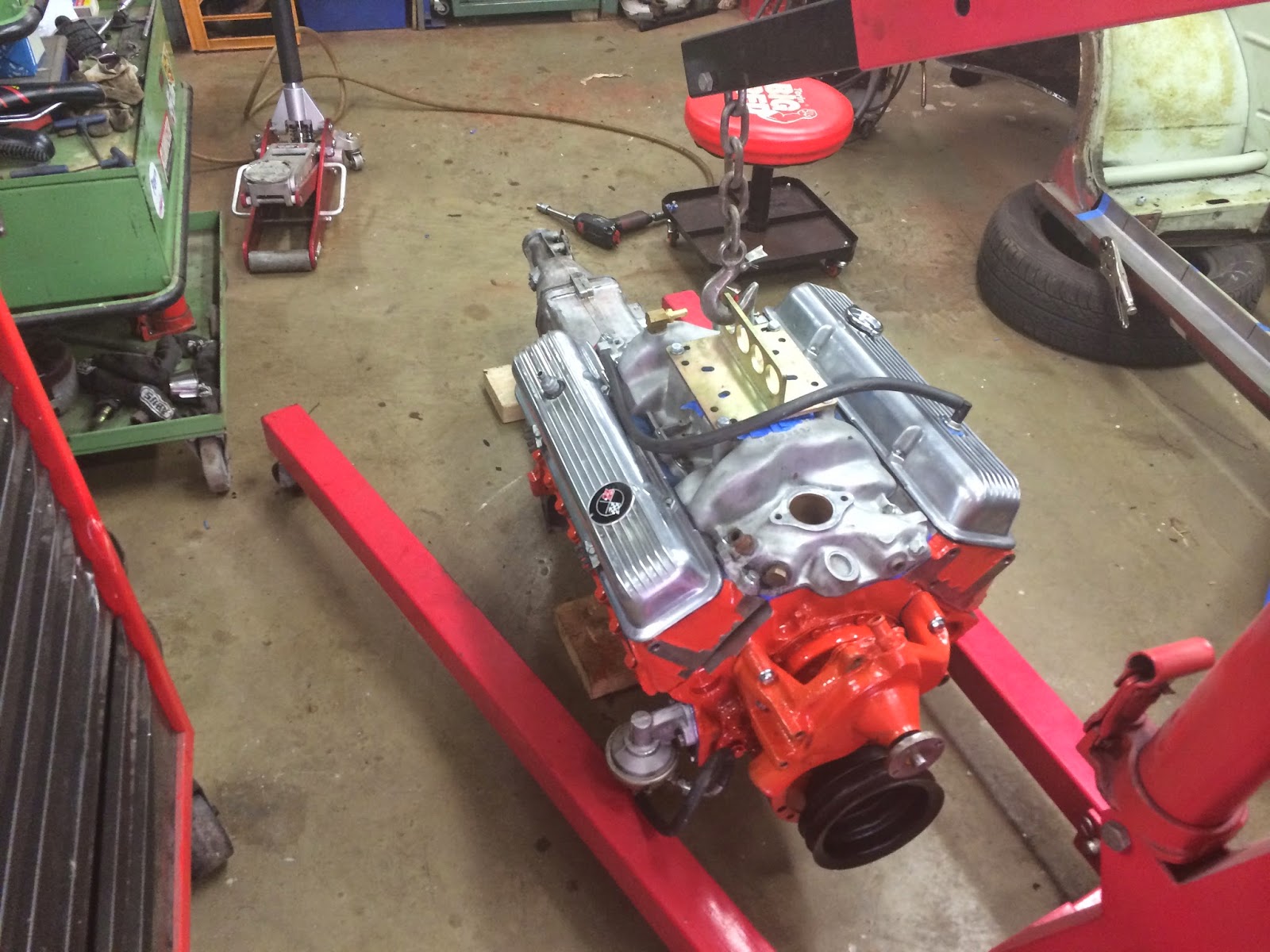 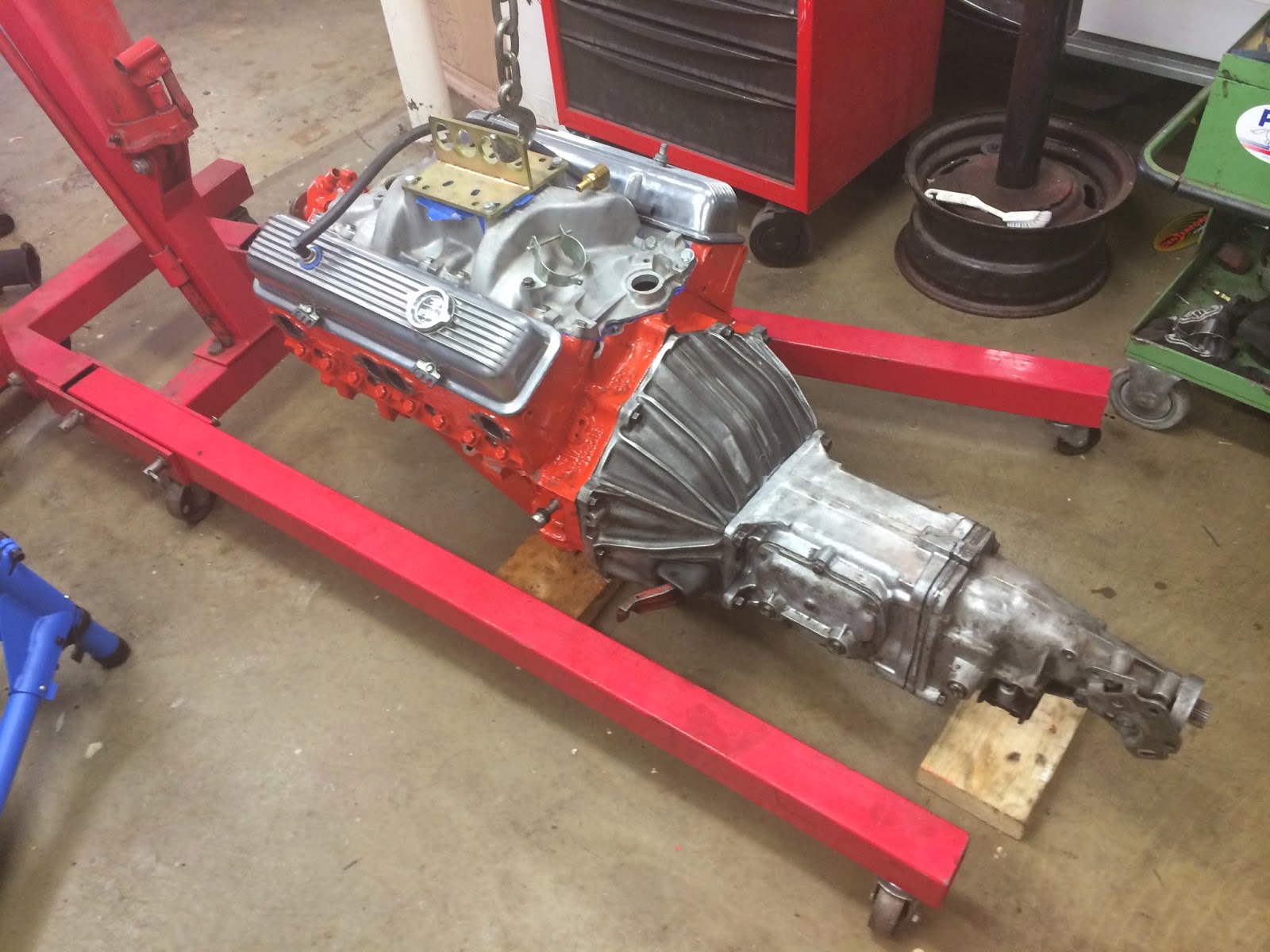 Waiting restlessly to get back 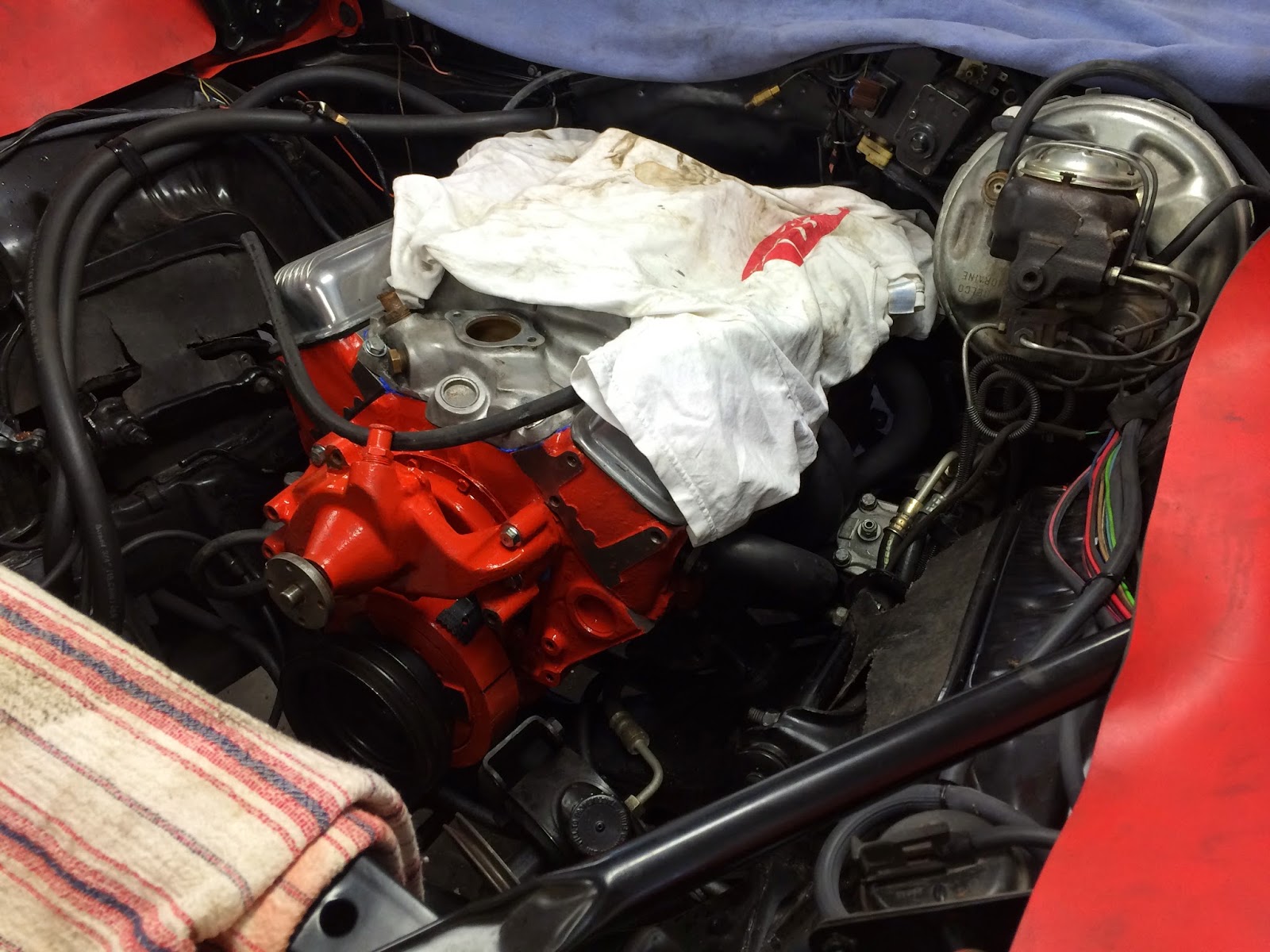 Just landed in the engine bay after I and my friend Stephan D put it back in to car. Two extra hands and a cool friend (mind) makes it successful. Although frustration was on max level when we wriggled the drivers side header back in to the Car. The T-shirt on top of the motor was the extra safety measurement to protect for nuts and bolts finding its way in to the motor and cause bad suprises. 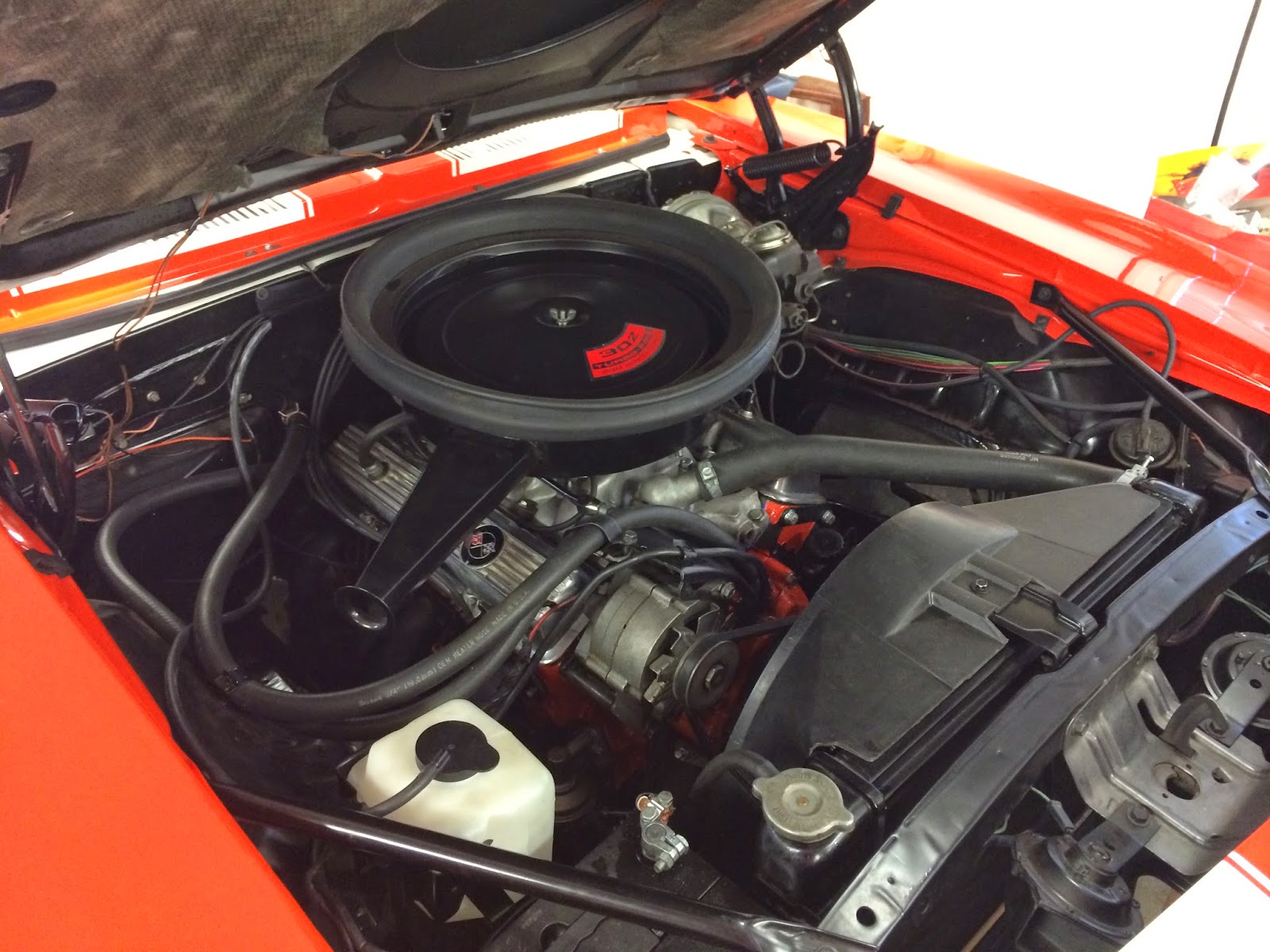 Details getting together and in my head the -what have I forgotten- question  repeats itself over and over again.
Later on, or at least until now, everything seems to be OK. 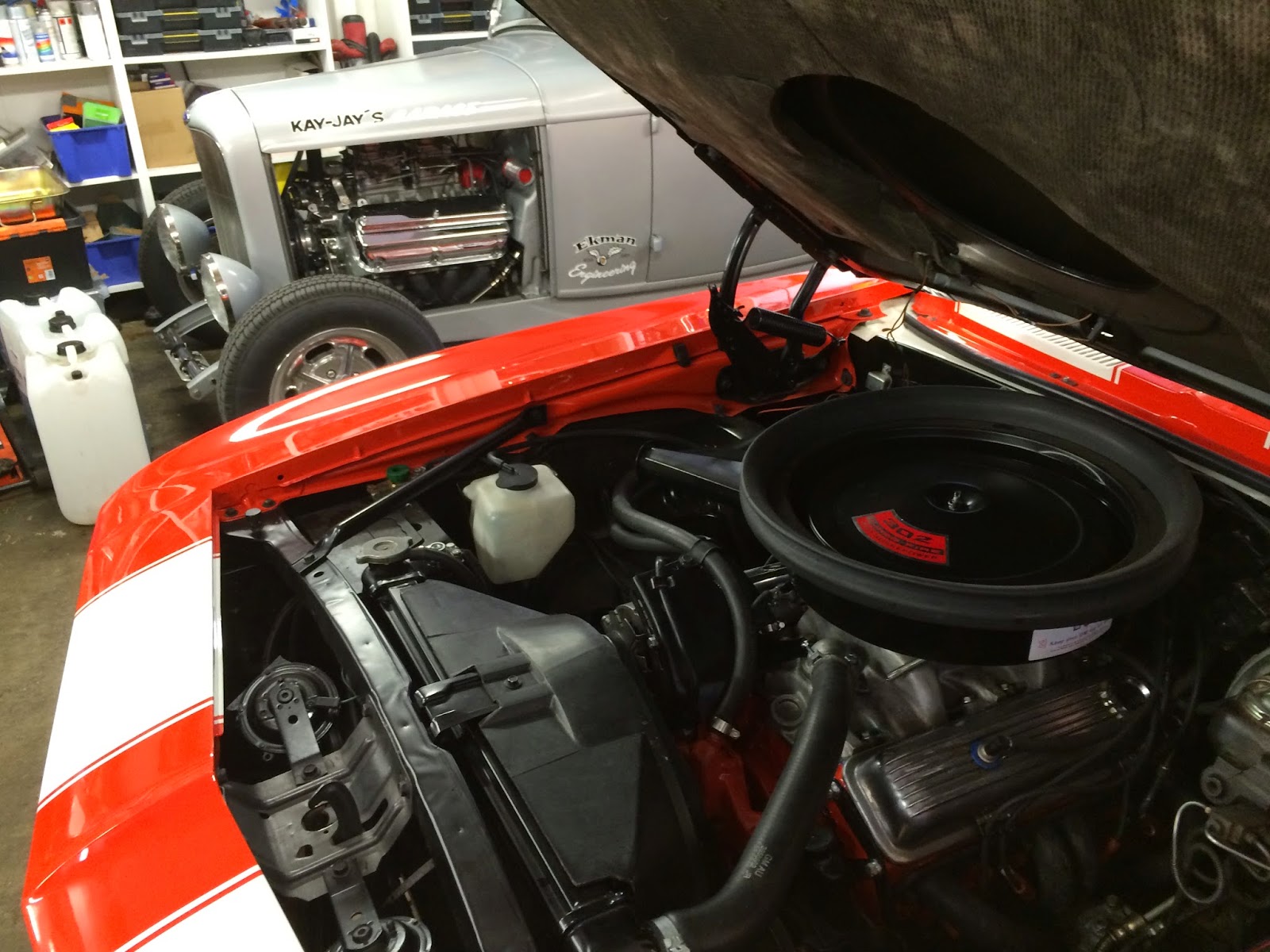 69's old friend the 32 Roadster is happy following the 69 getting back on track. The 32 is OK and not jealous since it got a new clutch earlier this spring (Centerforce Dual friction) and I can tell you that it has marked territories and given me the burn out face a number of times which a mix between the "oh shit" fear and "this is fun" joy. 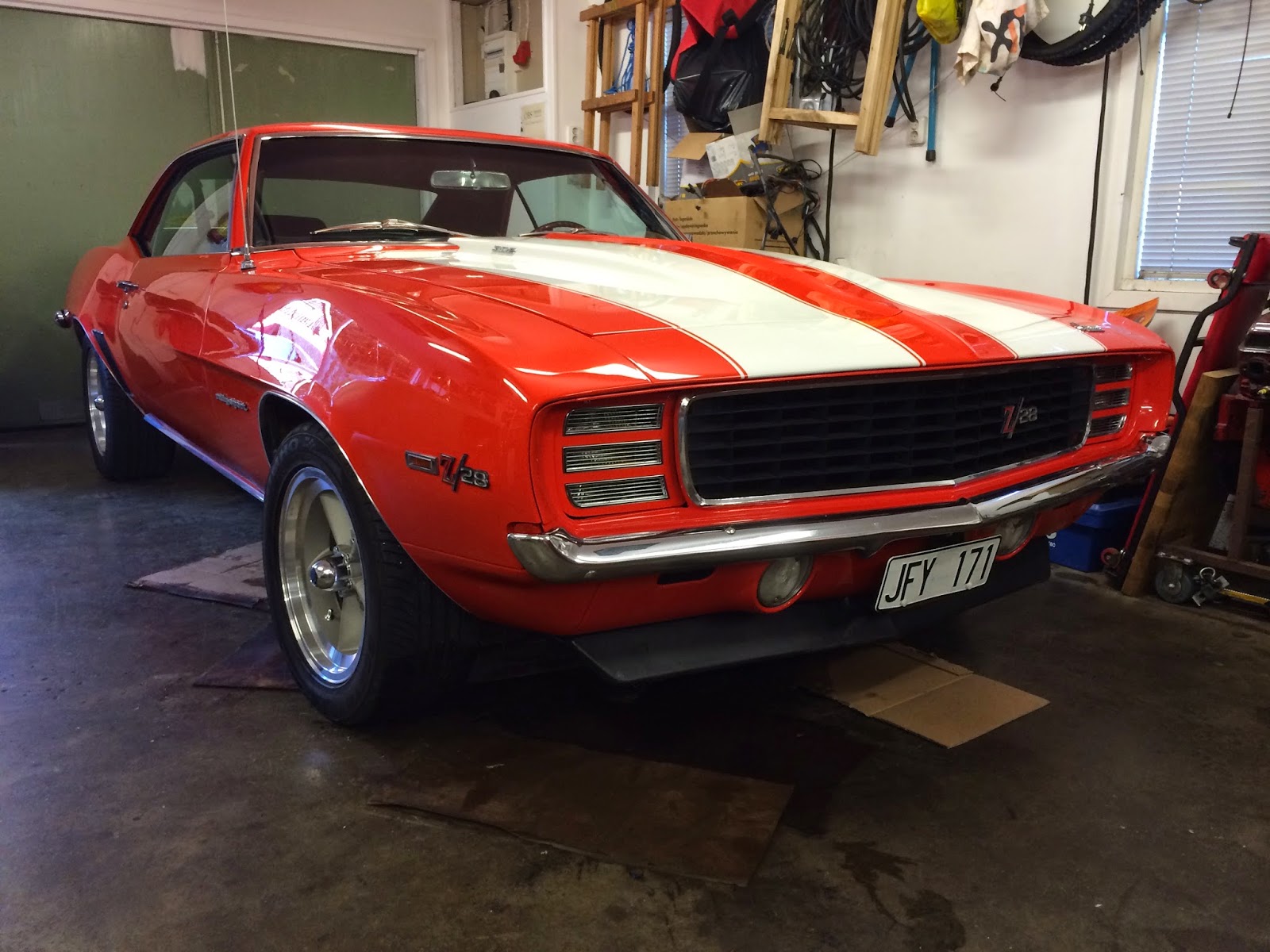 Not a dry eye and only smiling, happy faces when the Camaro was ready to rumble.  All gauges are working the gears are shifting nicely, the clutch feels great, the oil pressure makes you happy, stable temp and most of all, a nice grunt and a smooth operation in the machine.
Now I need to run it in, tune it etc. I welded lambda bungs to the headers and will use a lambda sensor when tuning. 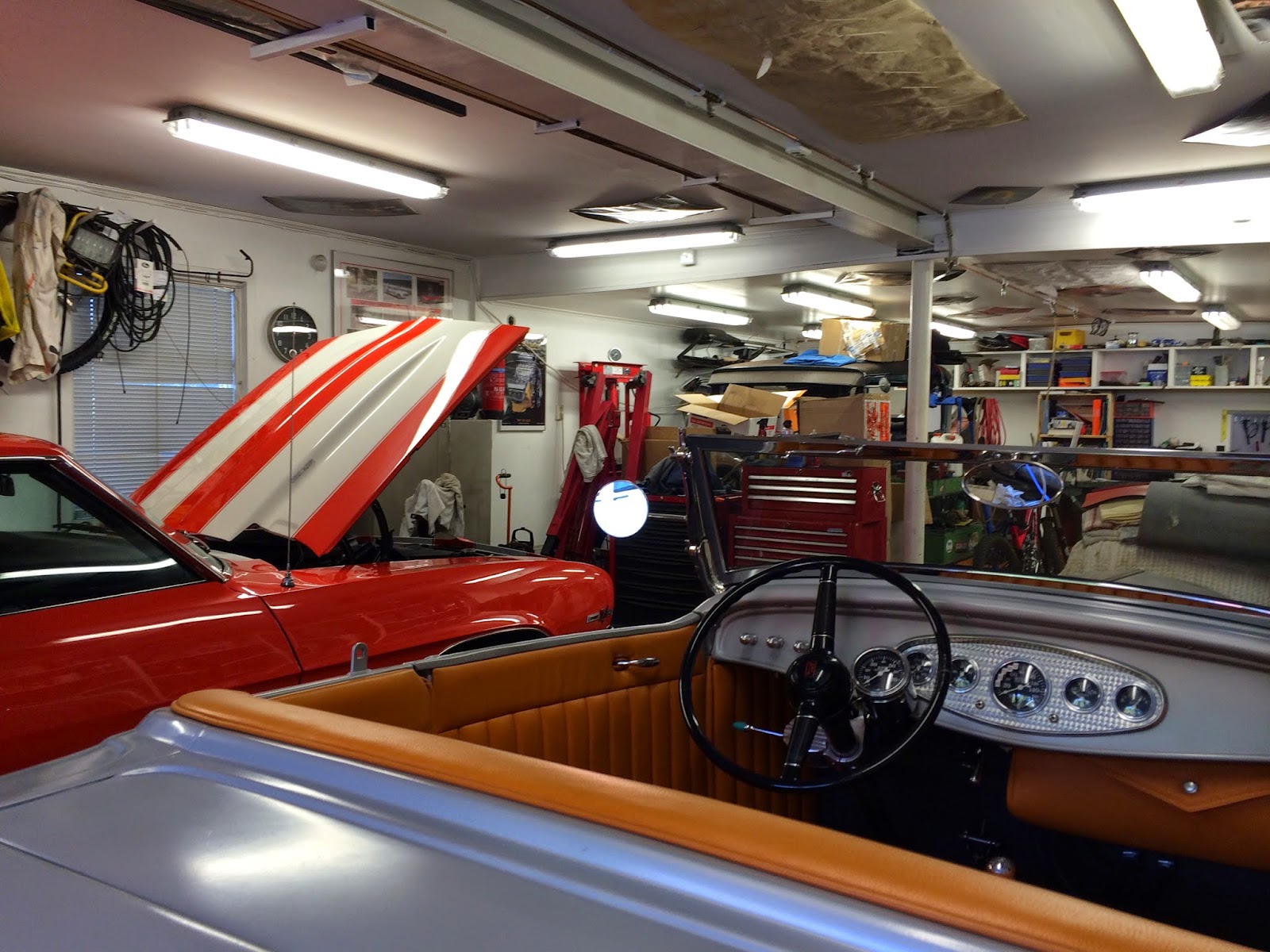 The 69 has is putting on a big wide open smile showing it's new jaws, but no worries it will not bite you only give you a lot of smiles per mile. 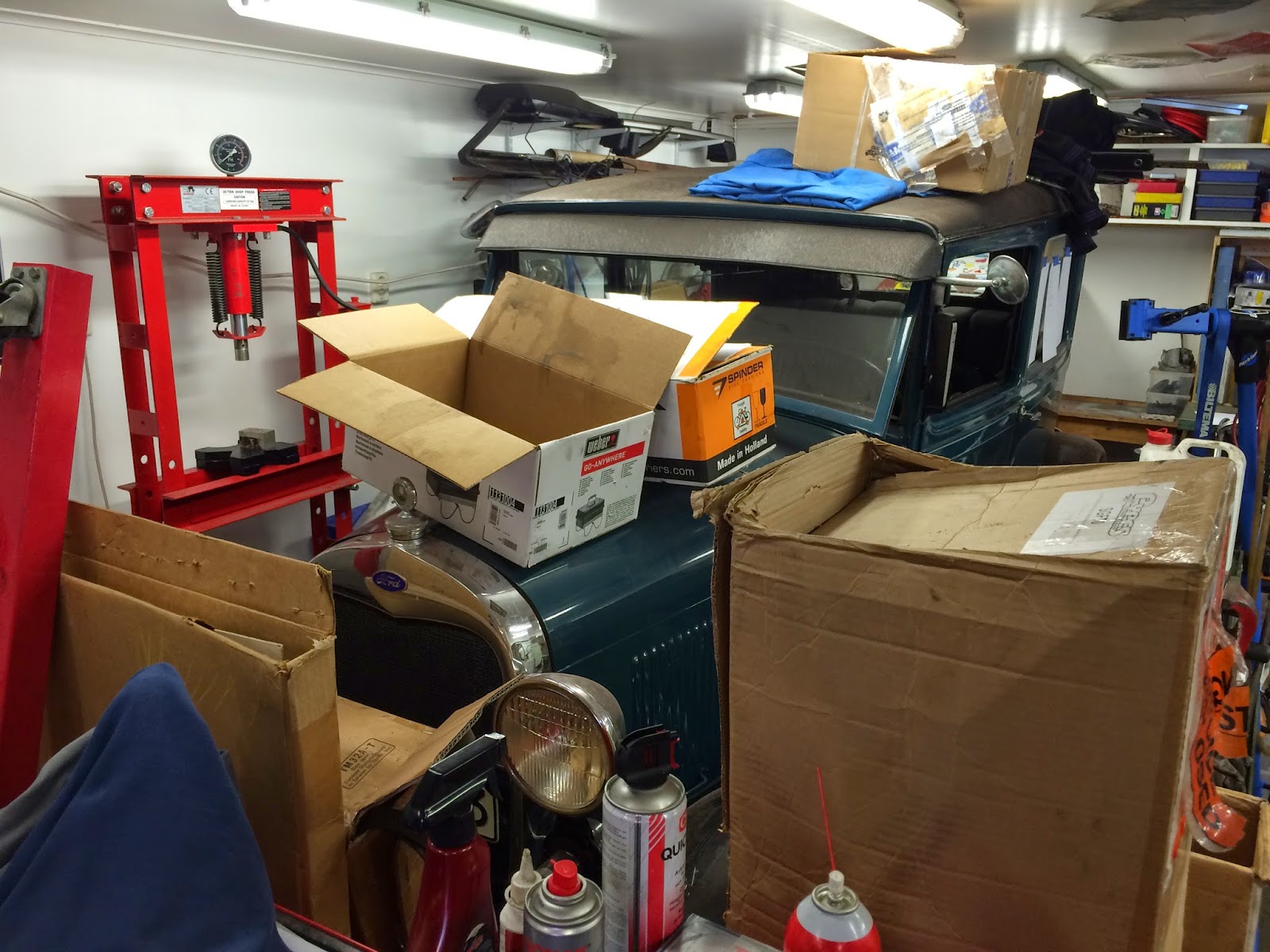 Deep in the garage, in front of the 69 the 28 Model A is impatiently following the love and care I put in to the 69. It's getting closer and closer for some model A work. Of course we have the SSR Amazon who need attention but you know life is good when you know what to do with it. We could all been stuck by the TV waiting for a miracle instead of being busy making it happen.

Posted by saltslushracing at 9:17 AM