We're finally there. We're at the point...or rather we've passed the point. The point when we started to concentrate on the engine. The heart, the sole and the source of Power.
To recap, we're using an all aluminum Volvo 6 cylinder, which we'll create by mixing a Volvo 960 longitudinal (or if you like, north-south) installed 3.0L 6 cylinder from the early 90-ties with a transversal S80 T6 from 2005-ish.The later is called N3T in Volvo language.
We'll use the block with piston cooling from the N3T and the oil sump & engine mounts from the older 960 engine. We'll actually use most parts from the N3T engine.
As usually, we started with drinking coffee, telling stories and talking load. But yes, eventually did some thinking as well... 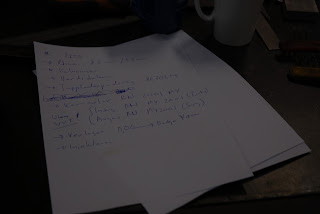 Then we set the specifications. No oily hands so far. 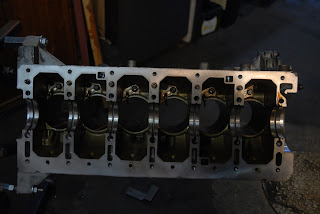 Next step was to remove everything from the block. Somewhat dirty. But as usually, pleasant. 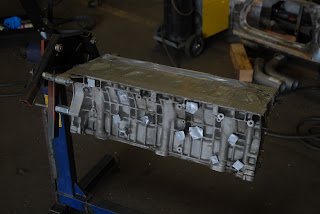 But how to clean the block? First we all agreed that glass blasting engine blocks is NOT a good idea. Never. Then I started with various types of manual cleaning devices and chemicals. After a while we reconsidered our strong opinions against glass blasting again. -It's after all High Pressure Die Cast block with no hidden oil channels...we argued.
-Shouldn't be a problem... so I sealed all open areas off and in to the blasting cabinet it went. 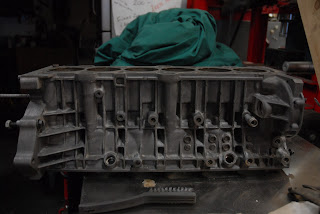 The result? Well, it turned out to be rather difficult to clean the block 100% even with the glass blasting strategy and on top of this, we needed to really clean the block afterward to get the evil sand (sorry, glass) out.
Which is why we went to Magnus-at-home-workshop where the engine block was baptized as he lowered it into his giant hot fluid kind of machine. A moment of peacefulness. In the picture above you can see the block after the sacred process was completed. 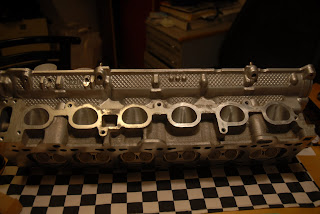 Our cylinder head arrived from Christer J. It was a quite moment, a moment of joy. The ports now have the size and the shape to cope with the airflow that we need to get the power efficiently. 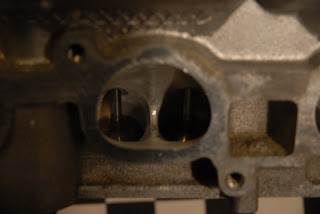 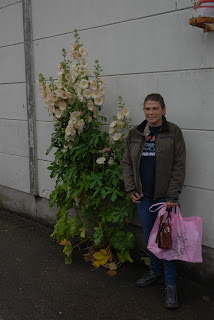 Meanwhile outside the SSR workshop. Carina enjoys the result from her experiment with garage hollyhocks. Yes, she's proud.