A lovely morning, on Friday the 13th of May (A perfect day for a good start...?) a group of colleagues & car guys from mainly Volvo Cars and elsewhere, meet up for an inspirational walkabout, something we have done yearly for 7 years.
The rule is that you have to use an enthusiast car (meaning not your Volvo company car). The brave one will get a challenge and a full-scale reliability run.

Olle and I gave a speech including information and words of wisdom. Simple brief information, without the rhetoric of early man politician since we've replaced the wooden fruit box with a proper pick-up truck. Normally, we never tell people where to go, since this might be too confusing for all of us...however, about 35 cars with drivers and co drivers arrived at the scene, all in good mood. 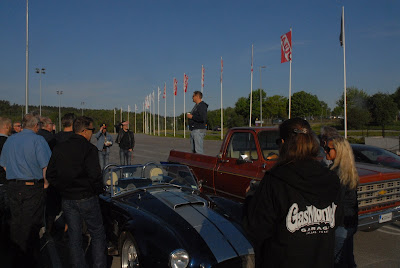 Ok. The message. -We're about to visit Mr Kent and Mr Kjell. One is close to Gothenburg and the other one way south of the border (Hallandsåsen). A total drive of 600 km. 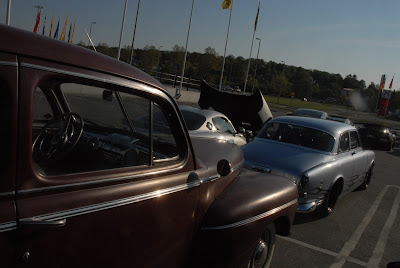 We've stopped to minimize the number of cars as we're going to Mr. Kent, who's located far out in the middle of nowhere, where the magic and forest meets the sea. 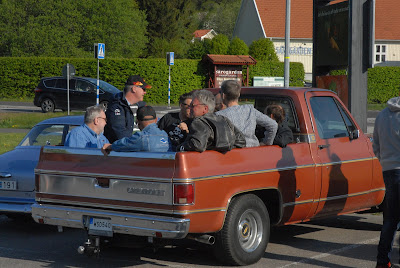 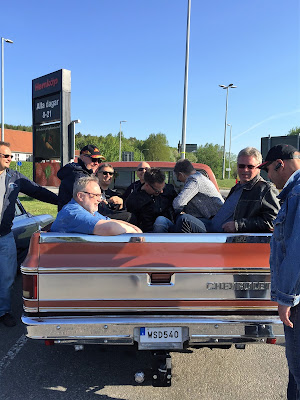 Only happy faces! No Fear. If some one ask if it's legal or safe we would answer... Yes! On the second question, that is. 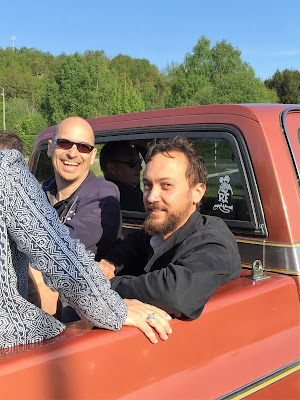 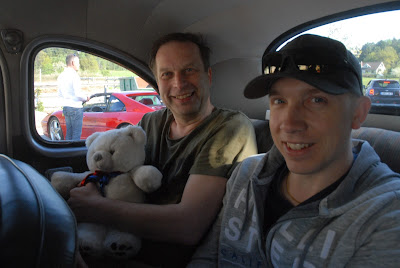 Ivar whos' usually talking about the future, is here going way back, back to yesterday in the back seat of a Ford from 1946 while Mattias enjoys luxury and space, he's not used to in his Speedster

Since Mr Kent prefers a low profile, we don't show any photos or relief secrets, what so ever. Let's put it like this, it's a dream of european race cars coming true and YES, it was way beyond (as we in Sweden would put it...) brevskrivning. 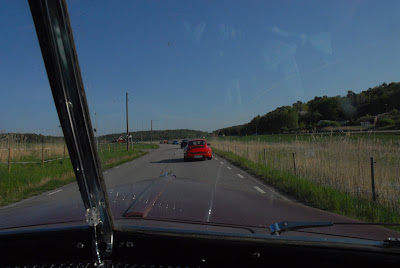 There's a Ford in the future! Take a way the Porsche and it could have been yesterday. 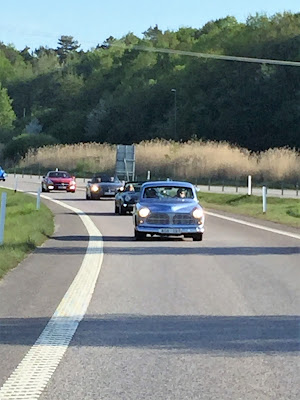 Ok. Now we are going south. Far far out to the land of strange accent and spiddekauga. For you outside Sweden that's a special cake made in the southern part of Sweden, Skåne. Take is from me, it's the truth. 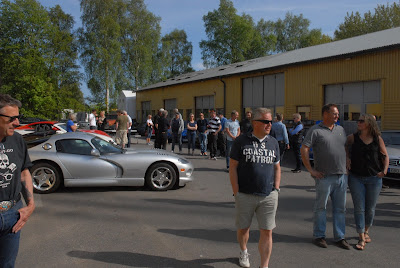 With the help of sheer luck and cellular phone, we all made it to the very southern outpost. Keeping 35 cars together while following the traffic flow is a challenge. 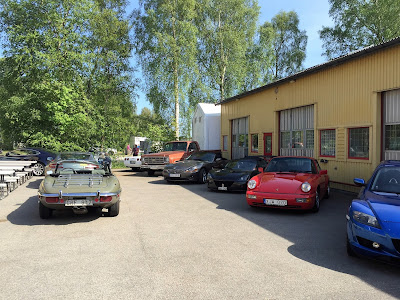 Porsche, Lotus, Jaguar, Corvettes and Mercedes etc. the list is long, the drive was not without Challenge. Just as an example Magnus blowed a cooling hose on his big block Corvette when enthusiastically climbing Hallandsåsen. But with the philosophy you have to make It work again! He was Ok 20 minutes later.
Håkan in the Ford 46 with it's original 100 hp flathead had to drive it as he had stolen it or had the trunk full of moonshine to keep up. 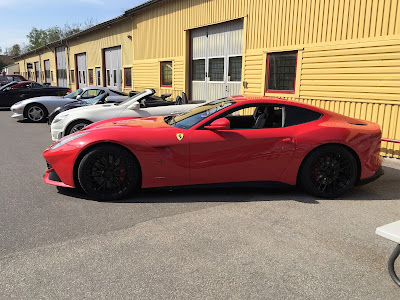 A red Ferrari in the sun shine... is nice...Mr Kjell who is in to The Right Sound performed a V12 symphony..., which was... lovely! 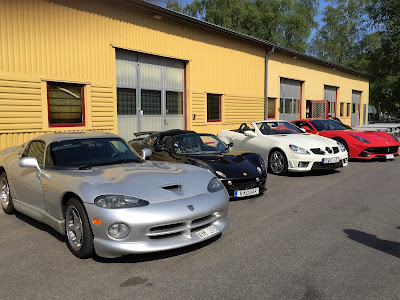 The Viper suported by a supercharger had a powerful advantage when climbing Hallandsåsen. 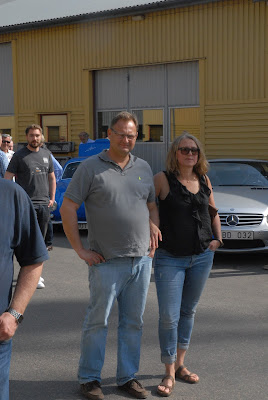 Me and My wife Catrine, who was just as inspired by Mr Kjell and his fantastic creations and show as I was. 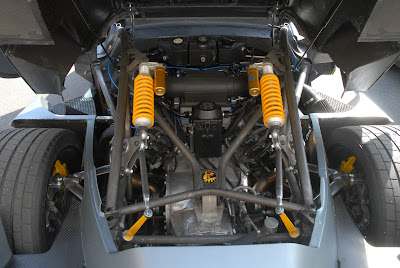 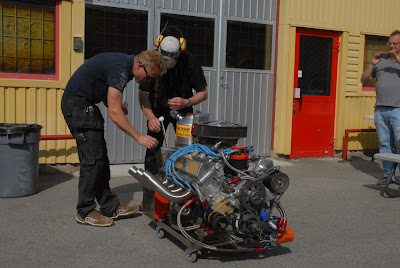 What is to become a margarita mixer and once was a NASCAR race engine was another symphony. Also Mr Kjell and Mr Henke prefer to keep a low profile so no photos. What we can say is that it was best ever and some of us and has seen a lot and as you might understand this goes both for the Hardware and the Software...


It was for sure an inspirational Friday, our dreams became bigger, our wives understood that even if we would go totally ballistic, we still have long, long way to go to even get to same continent of crazyness as Mr Kjell and Mr Henke. 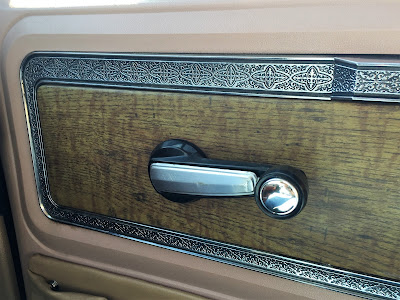 After such a total Automotive and Creative overdose, you end up looking for something to hang on to like the Silverado door panel deco. It became the mental anchor point to ease your mind and hang on to something you knew before the adventure that forward you in to the future 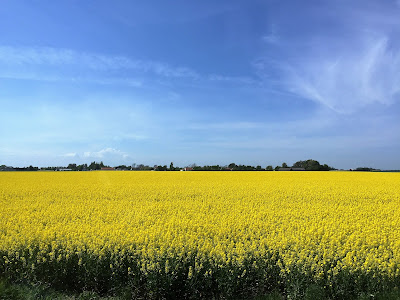 You search for a reference point try to stabilize your soul, why? Because what we have seen and meet was so outside the box, beyond science and above fiction. 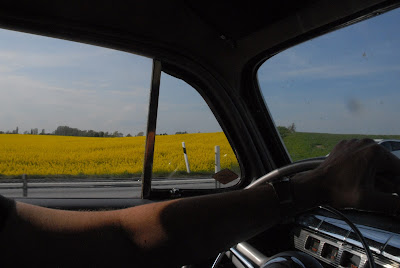 The Ford 46, still a trusted reliable friend and as always, when you are confident that it will bring you home...you start to like it a lot. 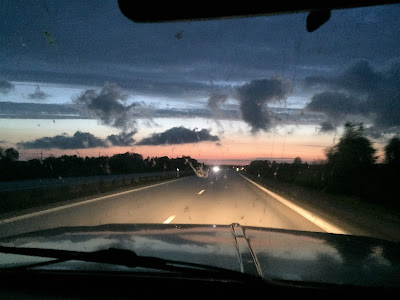 The Chevy C10 still healthy, in to the sunset going north to Gothenburg, around 9 mpg  average fuel consumption with and easy foot and steady at 60 mph (focused eco cruise), 454 with a TH400 and the two fuel tank option feels like a completely logic and well working combination.

I already started to think about how to match this where to go next time .... I have an idea..

Posted by saltslushracing at 11:56 AM