Take a Brake, Find the energy...and Get framed!

Yes, we've been drifting for a while. Like teenagers, we've been lost, far out in the car entusiast wilderness and we found gold.

We've have installed Magnuson Superchargers and Anders has used a lot of elbow grease and determination to resurrected an unhappy Corvette C6 to the street again. But we're now getting back on track, to the race car building reality after a period of low hanging fruits and mechanical pleasures. 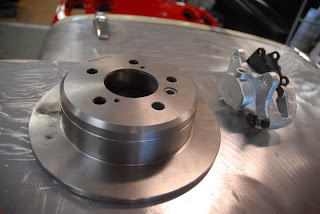 First we have a confession to make. The Salt Slush brake department have had a problem for a period of time. The Bolt pattern of the Currie 9 inch in combination with the 15 inch rims has brought us some difficulties....when designing  the rear brakes.

But eventually, Magnus magical mind broke the code and now we're almost done. Modified Toyota (!) brake discs, Modified Volvo 240 calipers and yes, we have clearance and (hopefully) a nice brake balance. We don't know for sure. God of Speed tells us nothing about braking during worship. Not his business. 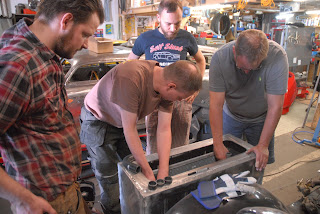 What have they found? The Holy Grail? A tunnel to China? No, it's a classic example of Garage Acknowledgement. Kalle has moved one step closer to cooling module completion and therefore a positive inspection is taking place. 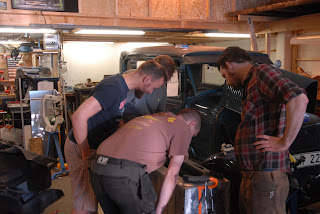 Or have they found something? 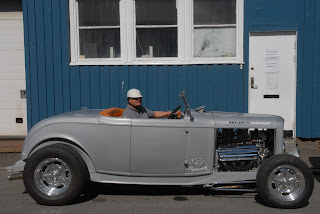 Still sober after looking deep in the coolant tank, Kalle took his -32, his helmet and drove away. Afterwards we could hear sound of burnouts and a Howin' Hemi was that for real or was it a fata morgana? (yes, it was warm in Gothenburg!) 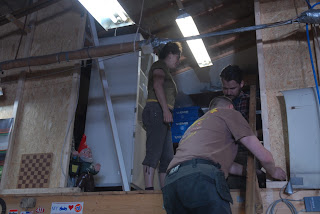 The Loft need a door, a double door and here we go, the frame is getting there. The loft will soon get cosy, cool and comfortable (no dust). 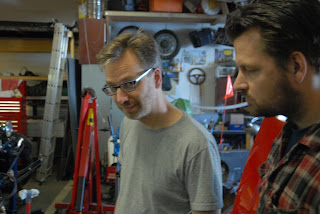 What makes grown men look like this? Yes, you guessed it! It's the troublesome alternator packaging that makes life hard at this very moment. Magnus found a way. 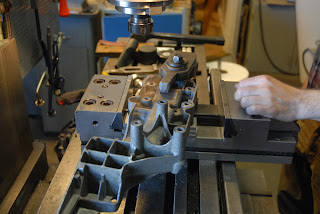 Which basically means milling his life away while modifying a bracket!