Ok. The sun is shining and our race car runs and everything works fine, well nearly everything....there is this oil leakage, which is like a stone in the shoe, you can walk, but it hurts a little. For a while we ignored the problem but eventually we started to analyze where the leakage came from.

By using fancy digital optic equipment, we found a small oil fountain from the connection between oil sump and bed plate in the area close to the oil pump. 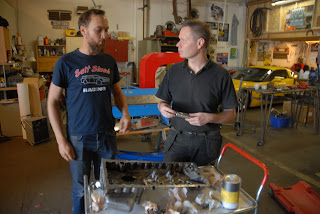 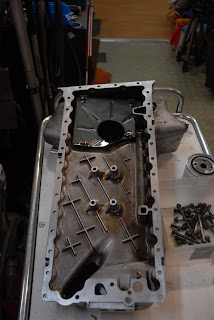 Here's the oil sump. But what was really the problem? 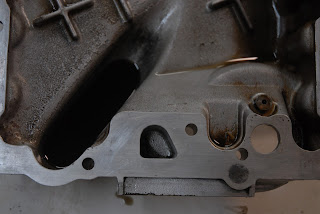 This was the problem. Around the hole to the left, there should be an o-ring (assembled in the bedplate). And there was none. Who was to blame? Who assembled the engine? Never mind....it's ok now. I've heard that it's only human to make errors.
Posted by Hakan at 8:13 AM