Perhaps the time is right to look inwards? To understand where you're heading with all your good ideas. New Year's Eve 2016 is getting closer and now is the time.
Here are some Salt Slush advices; Think, Try to understand, Aim high, but be prepared to fail when your inner eye can see that the shit is approaching the fan with good speed.
Under the headline, think, feel and aim high here here's an example: The old garage stove broke down, once and for all, and it was time to find a new cooker. But no one could be found. It had to be special one that would match the ambition of the high speed El Mirage /Bonneville Amazon. We almost wore out internet, without success, when all of a sudden an old French Paul Bocuse Rosieres oven appeared on Blocket (a Swedish type of Craigslist). The nice seller (a chef) helped us to load it on Anders Dodge RAM pick up and now we're aiming for a mixture of redneck-haut cuisine garage cooking in 2017.
The shit had sailed through the air for some time when we finally decided to change the somewhat stupid two turbos installation in to one athlete EFR 9180 turbo. Sad for a moment, but now we're almost done.  Let's start with this most important move forward... 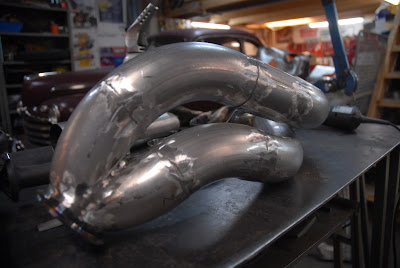 A conversational piece? Modern Art? Next stop MOMA?
Nope. It's the design that you'll end up with when you have a two turbo (in parallell) installation with two turbine outlets, then change to one big turbocharger with only one turbin outlet AND, in addition, have made a rather cool looking, well working, exhaust outlet through the passenger door previously.
These pipes are made to bridge this issue! 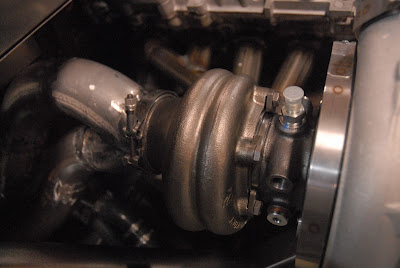 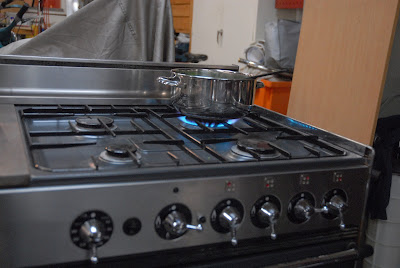 Ambition's high, the heat is on and the Kale is getting warm. 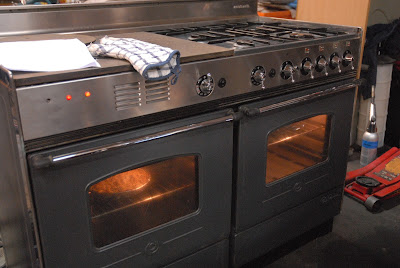 A Swedish-French-American food merge pictured. The Apple Pie is getting ready and it's soon to be consumed in our garage. 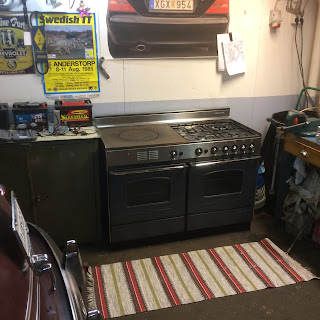 Advanced cooking awaits close to the vise near you, while a six cylinder Stovebolt hides underneath the zink (sorry, workbench) of course. 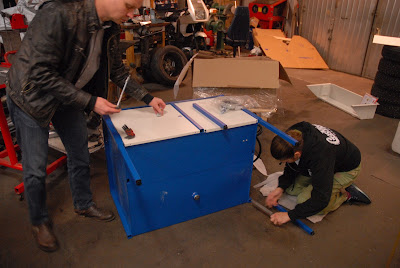 But what is this? No worries. It's only Anders and Cina who are assembling a cleaner aimed to make old oily parts shine as new. Let's get back to the result later. Next year...
Posted by Hakan at 1:43 PM