Alive, Alive, The Amazon is Alive! The Movie.

The smell of coffee spreads as the fog slowly disappears. Outside the Salt Slush workshop, Anders is washing his black Dodge RAM Hemi pick-up truck while the smoke from Tore's cigarett merge with the mist. It's a gloomy Saturday in January. The week has taken its toll, but there's still excitement in the air.
While everybody's waiting for the workshop to heat up, stories is being told and coffee consumed. We all know that beyond it all, this is the The Day. The day when we're moving on to the next step. From bi-turbo surge failure to +850hp EFR success.
Practice makes perfection. Listen to that nice no load high frequency ball bearing EFR 9180 turbo spool up. Yes, life's good, after all.
Enjoy the naked Land Speed Amazon heart as it's beating softly. Team spirit on top. 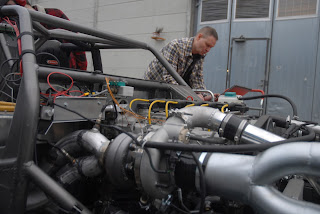 Anders, the Machine and The EFR turbo. No nonsense.