I have been looking for a new engine for my 1970 El Camino for a while.  It's rather cool as it is in many ways but it's a complete gas guzzler that spits and puffs and makes your day a bit unpractical.

So I have been trawling the GM performance parts catalogue and blocket.se, in parallel,  for a while. Trying to come up with some kind of more modern and civilised engine solution.  To add to the equation I have also had the idea to include a Magnuson Supercharger  - as we happen to have a spare one laying around.

I have been thinking in terms of LS3,  or maybe the new LT1 "connect and cruise" with 8l90e or  even the LSX 454 - which would have matched the SS454 decals nicely.  Used or new, all has been in my mind. Used turns out to be rather scarce and new, at no surprise, are not free of charge.

But just Friday I got some inspiration. It was a from an ad at blocket.se of a LQ4 long block with LS3 heads.  LQ4 is like a LS2 but with an iron block.   But with LS3 heads it is very much like an LS3 but with just a tad less displacement, 6.0l vs 6.2l.   And with LS3 heads I can fit the Magnuson kit

And now to the fetch engine story. The long block was nice but it was just a long block, nothing extra like gear box etc. But, there was an other ad on blocket.se that had been lurking for while but not really caught my interest. It was a normal but complete LQ4 drop out with a 4l80e, ECU, and all. That one with some actually cheap LS3 heads could be the right thing to do.

On Saturday I went in to decision mode and called the guy. Dan was his name and I told him that I like to have his engine.

We came to agreement. I went Sunday morning. 3.5 h drive was to be expected. Weather seemed promising. But I got a surprise. I went fully stuck in a complete snow storm in Halmstad, speed dropped to 30 km/h and had still to cross 150 km of dark woods in highland Småland. I was prepared to turn back.  But after a cup of coffee, looking at the weather radar and watch the salt trucks whiz by for about 1/2 hour I decided to try the Småland crossing.  The snow dump turned out to be mostly local to Halmstad, and equipped with Americas best winter tires at the rear of my RAM i headed eastward.

It was very slippery and intense so arriving at the other coast was a relief. Dan, his garage and his garage friend was easily found.
The very cool thing about Dan and his friend, Leif Molin, was that they turned out to be a fully live and operational replica of ourselves, our garage and even all our cars! 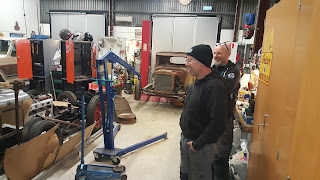 Here Leif is demonstrating his Hudson race car build.  On this topic they are ahead of our own dreams of a Nordic Special - very similar style. I the background we can see Leifs version of a Hot Rod with a Buick Nailhead, which compares very well to Magnus Börjessons current Nailhead equipped gasser project. 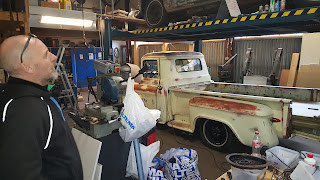 Here we can see their take on a 50:s pickup truck, quite comparable to Magnus white pickup. 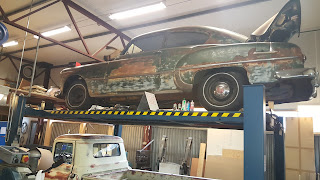 They followed up by showing some of their hangarounds cars, on the side, which continued to replicate what we have.  E.g a Lotus Exige (compare to Ragnars Exige), and a 60s Ford Mustang (same a our good garage friend Mario Felker have).

To top it off, when I rounded the corner of the building I could not believe it, there it was,  a white Ford Corsair. This happens to be the type and color of car which has been a long time member of our garage as well (Andreas Långström actually have two!)

All in all it was a very nice garage visit, and we finally got the LQ4 loaded.  With the much needed extra weight on the rear axles I headed home  It was a slow crawl back on chaotic and snow riddled  E6. 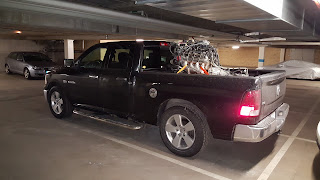 Had to park it like this, in a common garage, with my precious and valuable engine exposed.  But I figured that it will be close to impossible to steal it as it was a hell to load it.

Posted by Anders Karlsson at 3:11 PM