When I started to build my Hot Rod, a 1932 Ford Roadster a Chevy SB was planned.
....
But the build ideas started to come, one by one. It would be cool to have something else.

For a while a Chevy Big Block was an alternative with the intention to fill up the engine bay better....create some more presence.

The process continued and the idea to have some more classic Hot Rod Engine turned the focus to an Early Hemi.

Even at that time a Hemi was tricky to find so internet and contacts were explored with no success,

Then I came to think about an article in Power Magazine where Kjelle Power built the Green Doane Spencer pastiche. He was in contact with the late Baron in Bettna. Via phone contact was made and Yes! He had some Hemis mostly 331, no 392 maybe a 354......discussion continued. Could he consider to sell the the 354 ? No not really..... But ....hmmmmm... maybe....OK

All ended up with me taking a drive to Bettna. A 400 km tour one way and visited his storage...It was an old Diary out on the country side transformed to a Mopar heaven, Baron had bought the whole stock of MOPAR spare parts when Saab Ana closed down their import of Mopars.

There was mainly parts from the 70ties and 80ties cars and mostly brake and chassi parts as I understood it, no big piles of Hemis 340 440 etc., but still, mind blowing.

To meet Baron in Bettna was an experience, the nickname Baron was possible to understand. The Diary was his kingdom, he ruled it and behaved more like a renascence man in his although worn and used white shirt, tie, pullover. In short, in his white collar clothes.

For practical work he had some normal car guys engaged.

I had made arrangement with Baron that he should change the valve guides in the cylinder heads. The engine should, besides that, be in good condition in need of almost nothing.
Just put it together and start it up.

We'll...,the engine was bought, since I was hooked on having a Hemi in the car I swallowed the bait, payed the money and basically bought a kit which turned out to be in need of everything an engine can ask for. 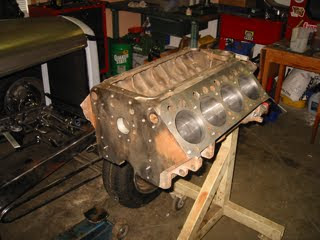 I took the engine to Motor Janne in Anneberg to figure out what was needed. And yes, it was more than everything,  Someone had changed the main bearing dimensions in the block so I had to modify the engine block further to take Chrysler 340 bearings. One cylinder had to be sleeved, so I had to fully machine the block, crank etc. On top of this one cylinder head had been cracked when the valves guides where installed. The cracked cylinder head turned out not be possible to repair. New heads had to be found which took some time...

For a while I tried to get suport from Baron without any success, his health had started to weaken and He died eventually in 2009. 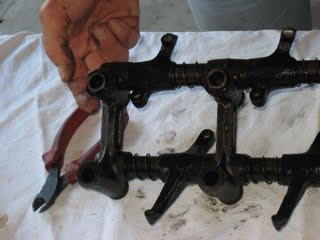 Cleaning and dismantling of old parts. A lot of old old oil in the engine.
In addition, the engine was modified to take a manual Muncie transmission
In principle I bought all needed parts on HEMI HOT HEADS. 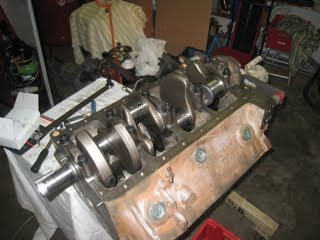 The machined block and crank.
Compared to a Chevy SB the castings is of much higher quality and due to that, the engine gives a slim impression and yes, the crank is forged.

When your are looking at the engineering solutions used by different OEM and brands it's possible to understand their priorities and culture.

(Yes I know you will tell me I am wrong, but I have my impressions and yes, there are exemptions) 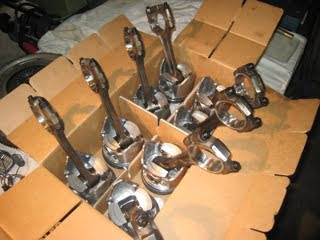 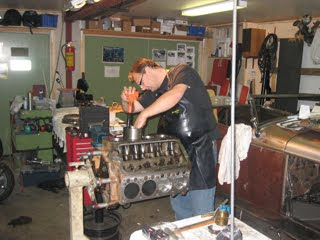 Now, it starts to come together 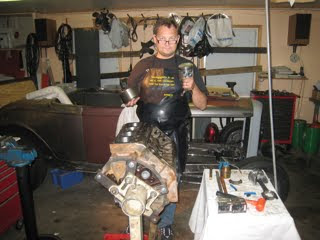 It is fun !
After all the hurdles and issues to have solved it! Everything was under control. 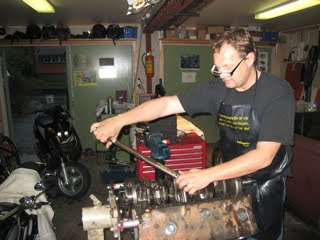 I focused to do everything carefully with no shortcuts. 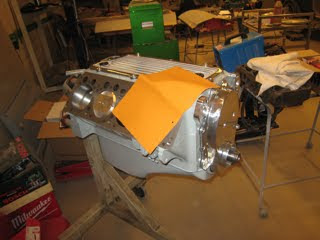 Here you see the the assembled engine, block painted, together what was to be the interior leather color. 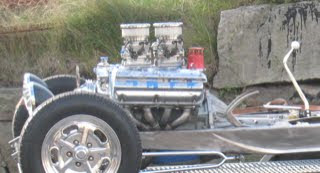 Engine and transmission in chassi 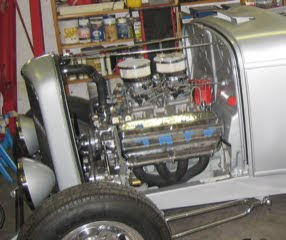 The engine in the painted car soon to be started.
Yes! It fills up the engine room much better that a Chevy SB.

Was it worth it ?
Yes of course! Although the engine was a borderline, almost not possible to save, it was worth all effort.
Is it really fun to drive, it is a very nice combination.

The engine sound on idle is very nice and the 354 Hemi represent a level of strong elegance.

Posted by saltslushracing at 11:53 PM