- If says Rocket…just seal the deal. That was Magnus words of wisdom, when Carina asked for advice. As it turned out, he was right. The Ariens Rocket Rototiller is a good thing to have. Because when it eventually start up, it's a powerful...destroyer.

Years passed and Magnus advice was softly pounding my brain. Then suddenly, in the middle of the desert, when I was in despair, it was standing there. Like a vision. Right beside me. A 1949 Oldsmobile Rocket just sat there softly in the sand. Waiting.

One year later I learned that it was for sale and yes, I bought it. But why? A no-brainer. It was a Rocket. A Rocket 88.

So what's so special about a rocket? What makes it magic?
Well... it's aiming high, it has speed, it's there to find new places in new space. Like a meterior it will bring change. Of some kind. 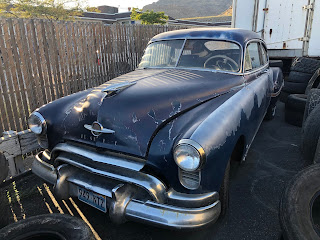 Once upon a time it was groundbreaking. The Oldsmobile Rocket 88 entered the scene in a time of hope and blind naive believe in future and technology. Similar like today. It created the first muscle car craze and initiated a performance race that lasted for decades.
As a consequence, the first Rock'n Roll song was about the Rocket 88. 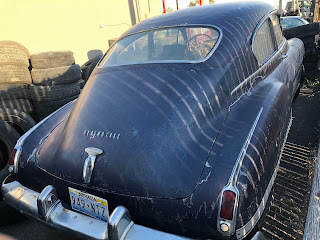 Rocket 88 came with a overhead valve V8 with 300% more power than the average European car and 40% more than Ford V8 in US. On top of that easy to tune. Consequence; It won NASCAR and Le Carrera Pan Americana 1949. The Oldsmobile sales went ballistic. I'm not surpriced, 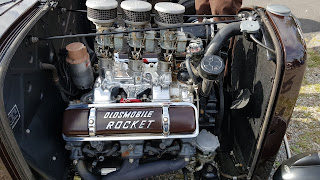 Yes, people were tempted to use this power source in even lighter vehicles. 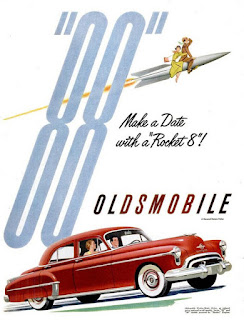 The Rocket 88 Commercial: Go fast, aim high with rocket speed.
Go to the Moon! Even to March!
At this point in time the grey hangover of the 70-ties were still far away.
Epilogue: Magnus is correct. If it's called Rocket search for the wallet. It's good for you.

Later on, new fast forward looking words entered the scene.
Supercharged and Turbo are two of those.
We know all about it.