One mans trash is another womans treasure.

The Real Need. Something that keeps you awake at night. Something that pops up when you're between dream and reality. A longing that aches. No wet dreams or wild desires, instead an essential procurement that makes a ride complete and the inner eBay junkie to feel at ease.
Restless sleep and procurement pain can be solved by strong supply of money or by successful search for the holy grail.
This story is about the later.
The scene: A blistering summer sun in the middle of high salt desert. A broken down tow car and frustration.
Available on a Sunday in Wendover, US: A service minded workshop owner, a desert establishment that can solve whatever problem that turns off the highway. Come hell or high water. Come rich and poor. They serve and solve.
What happened: The race was on and the salt was solid, but the Salt Slush Chevy Suburban base camp was not in shape anymore. The starter motor had gone belly up and refused to turn the engine at a moment when a start was essential. The workshop owner provided friendly support. He offered, and delivered, an emotional ride in a dusty car hauler. A silent journey while waiting for his support under the zenith sun. Meanwhile things happened.
Temptation: Outside the workshop stood a Rocket. The number on it was 88. It had a torpedo shaped back, two doors and it looked like a P38 lightning. It belonged to Mr Rowley, and it was not for sale.
At least until one year later when we once again were in Wendover to participate at Bonneville Speed Week with our 449 Amazon. At that point Mr. Rowley had changed his mind and his worn Rocket was for sale.
Advice: I called my friend Ulf Christiansson to get his view of the Olds Rocket.
He stated that;
- If it doesn't have original seats, be careful! These are really, really hard to find, you'll have to look for years! Other than that, buy it!
I thought; How difficult can it be? And bought the car.
Let's get to the point...During the year that followed after I got Ulf's advice; We took a pre Corona trip to Pomona Swap Meet outside San Dimas and we made a zillion eBay search per day every day. We used all car guy network available and we scanned all Swedish and US junk yards all days all year around.
- For what?
- For a seat!
-...or rather, for two seat benches that would fit a Chevy, Pontiac, Oldsmobile two door torpedo back body made between 1949-1951.
ebay: Through a series of unlikely events I got in contact with Mark from Missouri, a solid man with a part supply that heals the mind of a searching soul. Telephone calls were frequent, pictures was exchanged and mutual trust finally sealed the deal. The rear seat deal. 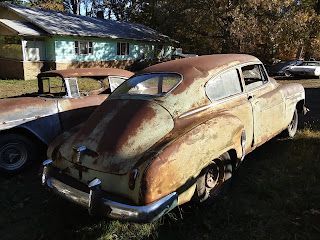 Pictured: The doner from Missuori, a Chevy Fleetline. 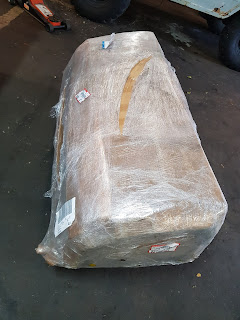 The Cocoon as delivered by UPS.
Disclaimer: No Giant Catepiller or Egyptian king inside. 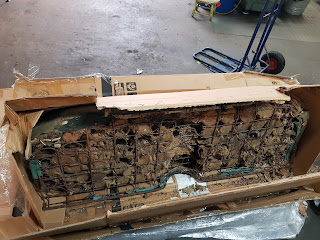 The former home of squirrel's.
More rare than a lottery win.
No bad smell, just empty nut shells.
Are thoose soft squirrels clean and mean?
...i.e. do they belong to a higher hierarcy than rats and rodents? 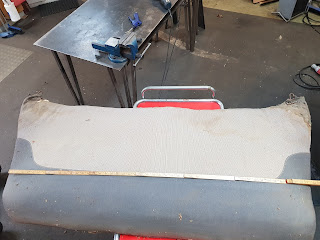 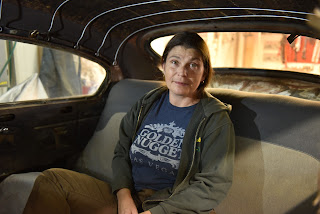 Like a glove. The rear seat fits just fine. At this point Cina can hardly understand that we've reach a milestone, that we've finally found what we've been looking for. 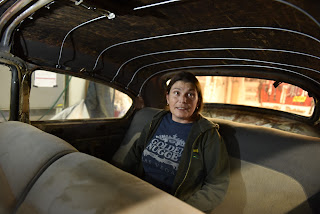 Seeing is believing. Cina is here taking in the room. Two benches are in place and a long search for seats is complete. Next phase can begin.
Epilogue: Race parts procurement might require patience and planning and loads of money too. Painful but true. Finding old odd ball part requires relentless detective work and a series of celebrations (a beer for each success on the way to victory!)
Posted by Hakan at 12:42 PM