To be Ready. Complete. Done. -A Magic Matra Moment.

From junk to gold. From rags to riches. All good. But as hopelessness moves to happiness an emerging emptiness appears, because at the end of the rainbow there are less dreams. But the object is now charged with elbow grease, long gone salaries and memories. In short, it's ready for the road or the race.
It's time to start to get to know the vehicle as A Ride.
You've hold the crankshaft in trembling arms, you've seen meter after meter of weld wire reach sheet metal wounds and you've eyeballed the engine waiting for the first ignition.
But now there's asphalt to be eaten. At first, you let it idle outside the workshop. Then you drive around the block with white knuckles. After that, the shake down can begin. All of a sudden the born-again-pain is gone, it runs like a Rolls and you can cadillac it down the road and start the first adventure together.
This doesn't happen too often though. Especially not with cars that has been 100% in pieces, close to molecule level. Because this type of restoration normally takes more time than normal people can plan for. All circumstances changes and road block pops up like trees in the forest. Over ambitious restoration dreams has killed many projects and left nothing but sadness lost money behind.
But not this time, because after 14 years Anders Matra Bagheera restoration is complete!
Yes, there were a 6 years pause in between when project such as the land speed racing project (The Salt Slush Amazon) and Anders private Magnuson LS equipped El Camino pushed the Matra out. But it came back, got it's electronic fuel injection and new upholstery and now it's ready. For real. 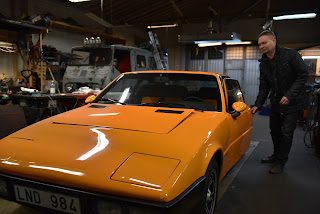 It happens only twice. In the showroom and after a decade long restauration
That new car feeling. 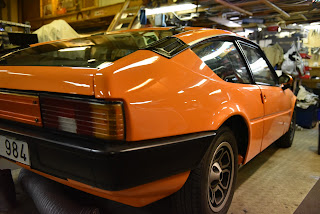 A new lease on life.
The old French 3 seater has transformed from a pile of porous plastic to a mid engine equipped, wedge shaped, weasel. 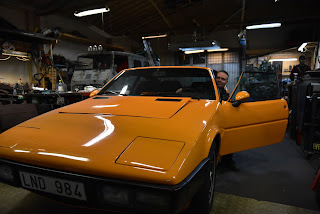 That sweet taste of victory. A Matra Moment.
(No, the hood is not that long, it's an illusion) 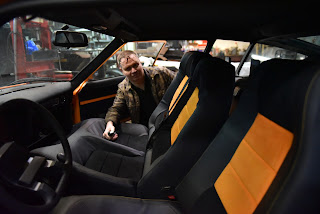 The last piece in place.
Yes, Anders made the upholstery himself. Of course. 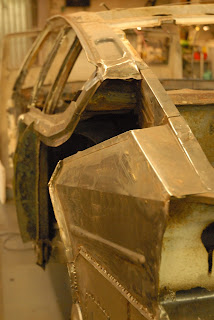 How it all began.
The bare bone Matra in less a crowded workshop one and a half decade ago.
Next topic: Not ready yet...
Posted by Hakan at 5:34 AM