Story Served at Salt Slush Speedshop. By those who won back in the dark ages.

Before it all started there was darkness. Freedom was just a word. A seven letter word that some have heard but few have learned. At least not in Sweden. Because we were captured. Captured in a repressive system. A system who knew what was good for you. Some would call it repressive tolerance while others refer to Plato and the The Republic.
Some others would call it bureaucratic torture. I'm inclined to agree to the later statement. Because basically everything was forbidden. If your dream was creative and you had a thirst for freedom, you were doomed. Heavy as lead. Hence Hot Rodding, Tuning and building cars was a big time annoyance for the socialists in charge back in the bad old days.
But when there's pressure from above, the underdog forces awakes. Guys with brains, balls and passion appears from nowhere. Because they were needed.
In those days I was really young, but I understood that freedom was not just any word. It was a word of importance.
There were a few, I would say two, who brought light in and creativity back to car and bike society in Sweden. The two that did more than many was Göran Ambell and Sture Torngren at Wheels Magazine. Yes, they started the magazine too. They relentlessly fought The System until they rightfully won. They found their way forward through the political jungle and made Sweden a better place to live. Think David and Goliath. Think Goliath RIP. The flow of young guns that felt the need to flee to the US of A to seek freedom stabilized.
Why this story now? 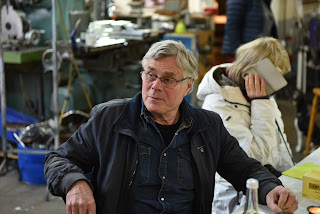 Because this Good Friday we had the pleasure to offer Göran Ambell and Marie lunch at the Salt Speed Shop. We loved every minute of their company. Göran is a storyteller with stories to tell and yes, he's still building cars and he's still writing about it. 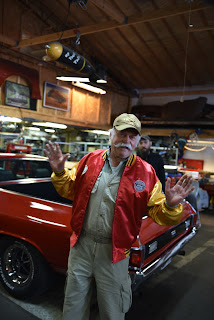 We didn't want to miss a out on any relevant contribution related to the creative side of the car (in this case military) hobby,  So we invited Tomas Terräng. A man who has done more than most of us and can tell us all about it. 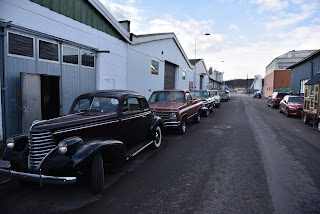 To a lunch meeting such as this, it's of importance to arrive in an appropriate vehicle. Ford and Chevy pick up trucks was the choice of the day for most of us. I took the Olds. 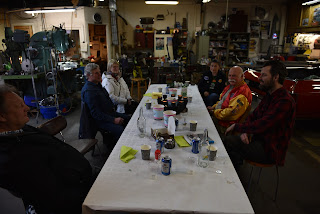 Salt Slush Garage lunch. To events like this we would have like to invite more people, but the Pandemic stopped us from doing so. Pictured; Kalle, Göran, Marie, Carina, Tomas and Magnus. I took the picture... 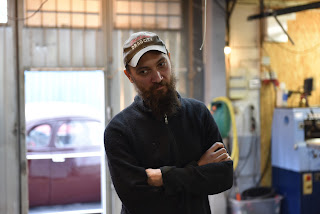 Ragnar, our garage neighbor noticed the absence of howling angle grinder, rattling milling machines, got worried and came over.  Yes, he and Annika got lunch too. 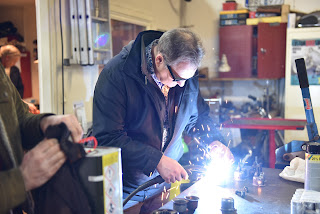 Yeah, I almost forgot. Tomas Terräng gave us a present. A Table Candlestick based on a rear end transfer case. Serves a candy bowl too. It just needed some final touch. Which Kalle provided without protection in his Sunday best.
Overall, we had lunch from 13.00 to 18.00 and even though we exchanged a lot of good stories, there are more to be told. Believe me. Just pick a topic..
We love it.
Posted by Hakan at 3:11 AM