The headline might suggest that we've changed church, joined a new dogmatic political -ism or gone intellectually astray.
That's not the case. We're still providing turbos and superchargers for those in need of speed, and we're on our way to Bonneville Speed Week at the end of July.
So what is it all about then? Here's what; a gear head friend, let's call him Johan because that's his name, invited us to his and friends garage in Gothenburg. It happened a Sunday some weeks ago. At this point in time, no miracles was expected. No temptation land. Nothing for sale. Just a Fika. I felt safe.
Then suddenly something happened. Johan showed something I've never seen or heard of before. It was a motorcycle. An Italian motorcycle. A motorcycle with automatic transmission.
-Do you want to test drive the bike?
-Hell yeah, I might as well while waiting for the coffee to be ready....
I got some useful instructions to which I paid limited attention, jumped up on the bike and drove a way. After 10meters I was in love. I was in love with this very strange contraption. Driving this bike was for sure a new kind of experience. No need to use to clutch, limited need to change between the two existing gears that after all is available. A perfect vehicle for city driving especially if you want to smoke a cigarette when red turn green at the red light. 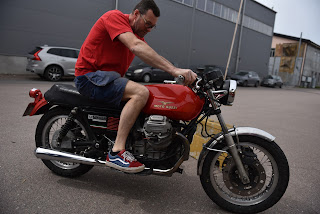 Before I was converted. Johan is warming up the Moto Guzzi iConverter.
Long story short; I drove the pictured bike and fell in love. I needed one. Why? Can't explain. I just felt a strong need. Later that evening I scanned internet and I found one of few existing. In Germany. 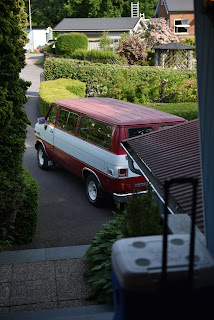 Fast forward two weeks. Now Converted with Guzzi on my mind. It's Midsummer Day. Our old Chevy Van is ready to run. It's early in the morning and we're on our way to Germany together with a lot of tools. 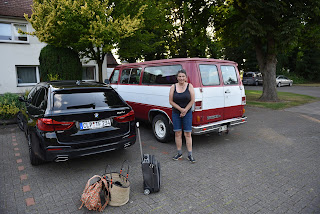 10 hours later and 1000km behind us, we're in calm place in Germany. The 40 year old Chevy Van? Reliable as a door stop. Didn't even sip some oil. 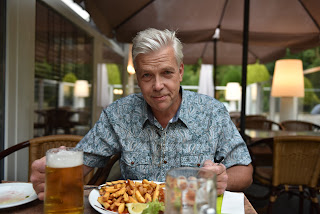 One Schnitzel, one Hotel and one Beer. 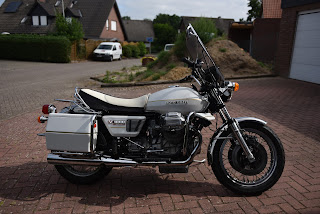 The shivering moment, when you see the vehicle that you've partly paid for the first time. Was there unconditional love? Yes. 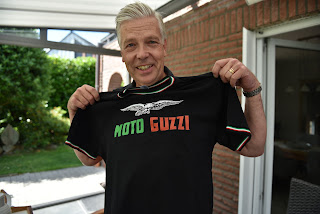 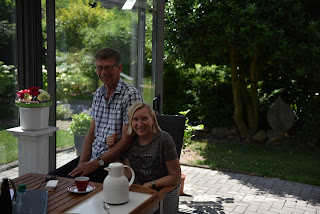 The understanding sellers who stood us by, while we learned that cash is still king and digital money transfer is still slow and painful. 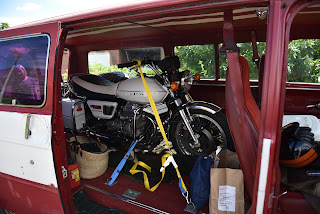 Yes, the Guzzi fit's like glove in our Chevy Van. How we got it in place? We drove it. I mean, it's an iConvert. That's all you need to know. 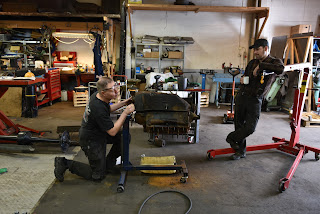 Meanwhile it was Sunday at Salt Slush Speed Shop too. Anders has just bought a Ford 1934 project and Magnus is telling him all he needs to know. And a lot more.
To be continued.