The Aesthetics of Exhaust pipe

There is a peculiar thing with exhaust pipes.  Exhaust pipes seems talk to us, and I'm not referring to the growl and noise, tough it may play a part of it, it's something with the looks that triggers a dark side in our minds.

It's thought provoking because the exhaust pipe ought to be completely uninteresting.  It's merely the outfall pipe for the remains of combustion, with it's useless rest products of water, carbon dioxide, some unburnt fuel - and the occasional puff of blue smoke from the remaining engine oil.

No, I think it's something else that is lurking here. The tail pipe tells a tale and the tale is about a sleeping force. We unconsciously know it, and we know that we need to look for it.  How we know it is a mystery (and I think a solution probably involves a magneto resonance scan of the right half of the human brain). 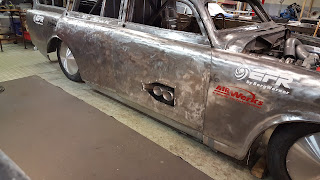 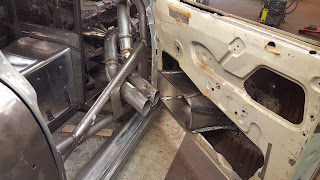 This way the pipes can move with the engine and don't need and flexible joint. I'm also thinking that the exhaust may extract some air from the engine compartment as it goes out, like an ejector pump.

The exit has a NACA duct look, but I doubt it will make a difference as I think the exhaust plumes will make everything totally turbulent. But remember, function equally important as form.

Or, as some say, if it looks good then it usually is good.
Posted by Anders Karlsson at 12:33 PM