The Weight, The Hangman, The Cart, and The Front End

In the dark and misty morning of 19th of December 2015, Gothenburg was gloomy place. Cold rain was dripping over people as they were queuing up to buy useless Christmas presents...and since it was half a year to summer, depression was hanging in the air.
This was the state of things everywhere in the....but what is this?
No, not everywhere! In the Salt Slush Racing workshop the light was on and the spirit was high! How can that be? What make us so active? And why?
Let me explain. 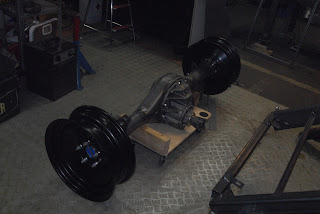 The Weight
It all started with a healthy coffee drinking session in which plans were made and various crazy ideas was exposed to other gear heads. Then we drove to Mr.Santa to pick up Crager Wheels with (hopefully) the correct off-set. A cheerful event. Yes, we assembled immediately on the Currie rear end. 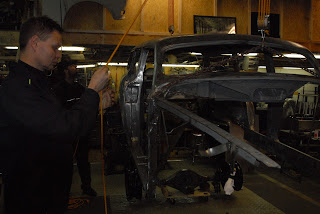 The Hangman and the Body
A nervous moment. Anders and Magnus are lowering the Amazon body over the new rear end assembly. Did they measure correctly?  The answer was, slightly surprisingly, Yes! 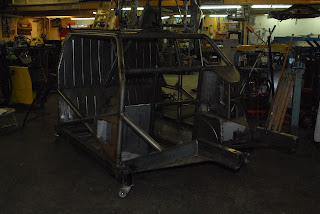 The Cart
Meanwhile, in another part of the workshop, the chassi /cage got another pair of wheels which will be use during the final fine welding and grinding phase which is now taking place, since we have the intention paint the whole creation before Christmas Eve. So we better hurry up... 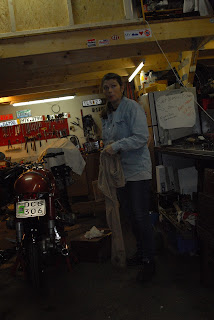 The Woman and The Bike
When Cina started up her old Beemer a week ago she realized that a service was needed, which is why old fuel and old lubes are replaced by fresh fluids. I guess the bike will shine like a crystal ball when she's ready with the service. To be used at home instead of the boring old tree perhaps? 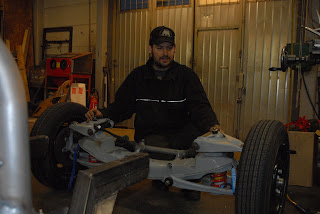 The Man and The Segway
When Magnus disassembled the front end from the frame, his associative mind was in full speed.  As usually.

All in all, it was speedy, cheerful spirit worthy Santa's Workshop. But will it all be painted before the 24th? To be continued...
Posted by Hakan at 2:32 AM