How Lathe Envy can change Infrastructure!

Life's not only about cars, bikes, speed and power. It's about machines as well. Along with machines comes the Machine Envy. Because everybody knows that he who owns The Machines rules. This might cause a crises until everybody has accepted the new status position of the machine owner. Nobody talks about this, that's not necessary, you can feel it in the air.
As Anders bought himself a Storebro GK 195 lathe, the rest of the Salt Slush team with friends understood that Anders was now the top dog in the workshop 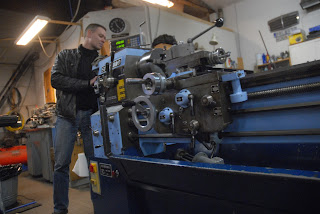 Anders and The Lathe. 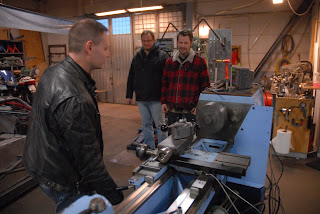 Anders performs a demonstration for Kalle, Magnus and me. Lathe envy pictured. Anders even took it to the highest speed...Magnus, the owner of numerous lathes and machine connoisseur, is impressed . 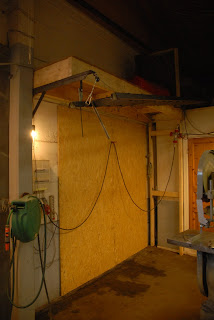 But where to host the machine in an already full workshop/garage? Infrastructural changes are needed. Anders had to find a way quickly. While I and Kalle was away, Magnus, Anders and Janne built a new home for the workshop compressor. Recipe: If you don't have floor space, use volume. The sky is the limit. 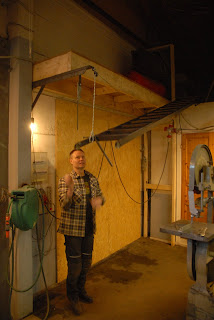 Anders has obviously been looking to much at Wallace and Gromit contraptions on Youtube. But yes, the toilet door is still possible to open and....
...then he tested his ladder elevator on Cina, presumably the least strong person in the workshop (true? nobody will every know, it's better that way.) 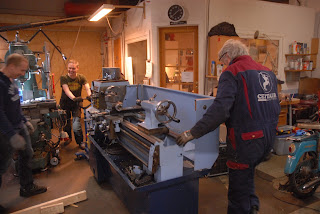 Mattias, Anders, Jannne and I pushed Anders new beauty (I don't really like the color...) around. Yes, we used Anders home made Egyptian type of Pyramide block mover. You don't understand? I might explain later. 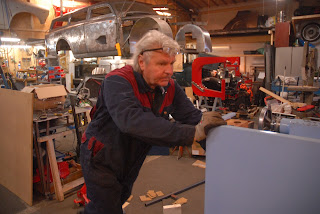 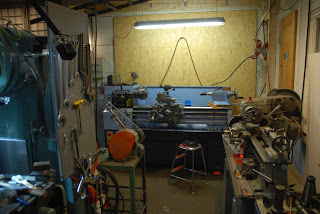 Anders now owns a nice milling machine, a lathe and...a power balance is needed. Maybe I should buy a really big Grinder or a Wire cutter...