The Barn. The noble art of storing dreams while waiting for miracles.

This world is populated with throwaways and keepers. Guys who like white walls and emptiness and those on the contrary that can be referred to as hoarders.  There's normally good and bad argument for both these standpoints.

Nonetheless, the Amazon left the Salt Slush workshop and we had to deal with the remains. A lot of Volvo 960 parts, half a S80T6 engine and various typs of mock-up race stuff.

Questions were raised; Which parts should/can be kept where? Urgent answers and action was needed since the Salt Slush Racing AB turbo and supercharger business is expanding.

Redistribution began. And we've found...various stuff and we've discovered all kinds of hidden car guy material, things from all kinds of not-paying-rent-kind-of-friends. What to do?

Public punishment? Throw away treasures? No. Here's how we handle the situation...﻿ 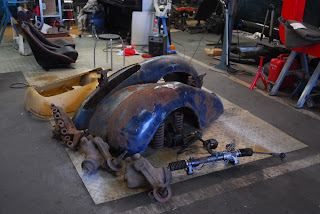 We made island of forgotten treasures. Then we called in the suspect's and employed a Judge. Short after we there was a verdict (which was pending the suspect's ability to store stuff elsewhere). Pictured: the leftover from a Chevy -36 build up. 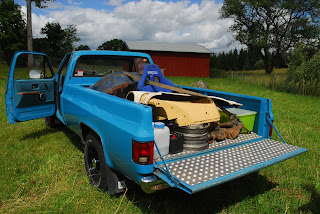 After everyone took their stuff home, and visited the junkyard multiple times and sold stuff, this is what we brought to The Barn. Volvo 960 cylinder head & cylinder block, S80 T6 turbo system, rims from Volvo 140, Chevrolet 1936 front end suspension...and a lot more... 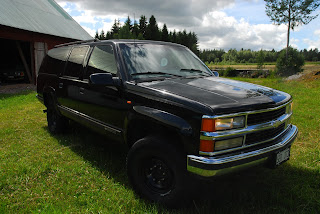 When visiting the barn you find stuff. Which is a good thing. Like Carina's old Chevrolet 2500 Big Block Burb. Good stuff. 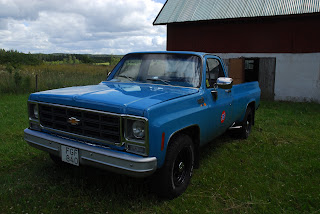 Square body outside a Swedish barn on a surface of green. 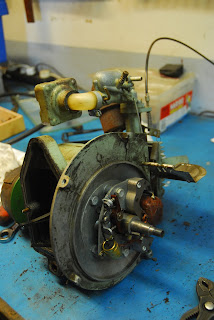 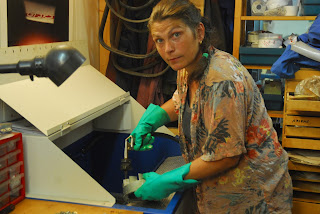 Carina the target to clean the oil pan.