If you would take any random Martian and lead this him (we assume for now, a male Martian) through the Salt Slush workshop on any Sunday, at first we would have one hell of a problem to explain what's going on in there and why people is doing what they're doing.
But after a while any common sense alien would understand that it's only when you think, act and do, that the soul of a creative mind relaxes. Besides, what really makes sense if you think about it? Here's what we would have shown him last weekend. 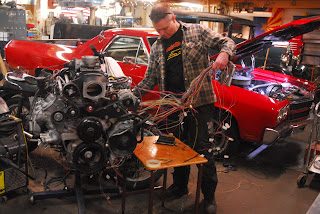 Is it the new noodle chef? Is it a tailor gone mad? 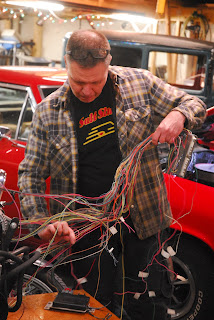 No, it's Super-Anders that makes some minor adjustments to the LS engine cable harness. Why? A well working nerve system between new LS heart and Anders El Camino is essential to get old and new merge in Powerful way. 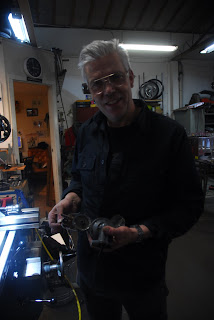 In the darkness, in another part of the workshop, I was using my favorite tool, the milling machine. Why? The Chevy -36 didn't run due to fuel starvation. Consequence: I couldn't join Kalle's Jalopy Winter Run. Which was an epic setback. 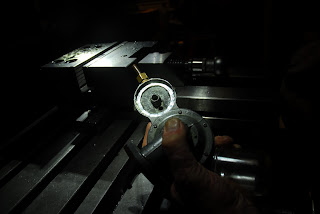 But I'll get back...there will be fuel flowing through the copper veins and there will be a Chevrolet Cannon Ball as well. Just you wait and see. Nevertheless, the milling was successful, but there was another leakage as well... 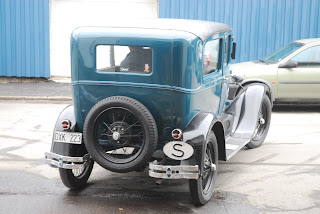 Yes, it's true, he just turned the key and drove a way as if it was his daily driver. Yes, it's turning 90 year old soon. The car, that is. 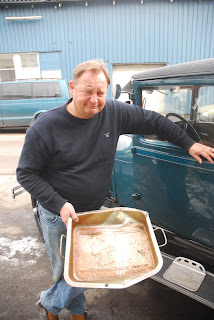 But no gain without pain. Even though Kalle think of himself as a really careful and modest person, he managed to kill a steel bowl as he was flying out of the garage like a bat out of hell. 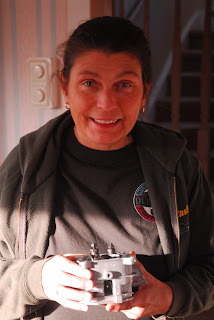 Still remember our guided tour for the Man from March? Now is when we really have some explaining to do. Hang on...Carina thought that it's a good idea to build a modern Ardun V8, so we (!) started this Ardun project and we're now waiting for pistons from Ross in US. So far so good. But she as well teamed up with Magnus and they came up with another brilliant idea...to practice side valve to overhead valve conversion and build a lawnmower Ardun. Suffolk lawnmower engine block and Honda GX 120 cylinder head, an Anglo-Japanese madness....here's Cina with her eBay cylinder head bargain. 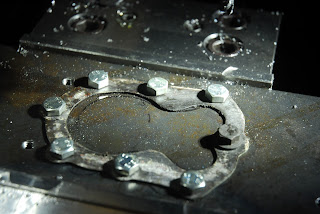 But as always, and adapter is needed and hence it's being produced. Don't laugh, because one of these days I'll walk out the door in my pilot glasses and leather jacket and tear up the lawn with Suffolk Lawn Mower with 300% more power. No robot shit, just real...

At this point in time our visitor would not be confused anymore. He would have reached another level and he would find no reason to explain what he have seen, because he would never go back to where he came from because he would feel at ease.