This Sunday it happened. When Ulf arrived. The rain was pouring down outside the workshop from heavy grey skies. Inside Carina was preparing for a hot Chicken wings lunch while baking bread. Yes, we have a workshop stove. We kept distance and drank check in coffee.

There was this Sunday feeling in the air. When your relaxed and expect nothing but being prepared for everything.

Ulf carried boxes. Boxes with tools. Shiny tools. Heavy tools. Strange shaped tools. Tools for men that knows how to use them and nobody else. He carried white pillow and blankets too. Still he had no plans to move in.

At this point in time we didn't know that we were soon to be amazed. Meanwhile, jokes were cracked, car dreams was shared but as the coffee got cold everybody got ready to work on their projects. In short, it was playtime.

Ulf approached the Torpedo back Olds -49. He looked at the dents in roof & hood and said;

- Someone has walked on it, probably a mid sized kid. Probably around 10 years old....

He rolled out the blanket and carefully adjusted the pillow to a comfortable position on the hood, climbed up through the hole where the front window once were. When in position he and his tool worked out dent after dent until they were gone, removed, vanished.

I've never seen anything like this before. The whole Salt Slush team just stood there...flabbergasted! 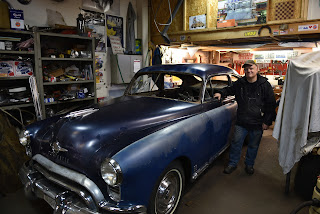 After 6 hours (including a Chicken Wing lunch) all dent were gone.
Ulf said it was ok. I was speachless. 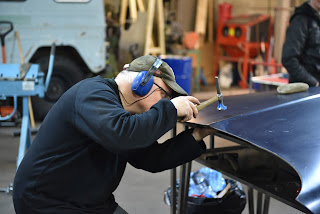 Pro in action. We were just standing there looking. Like cows.
Trying to figure out the secret. 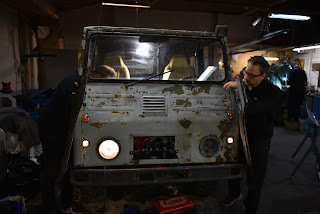 We studied complementary cooperation too, as Petter (The Professor) and Kalle (The Project Man) were battling with an electric ghost. 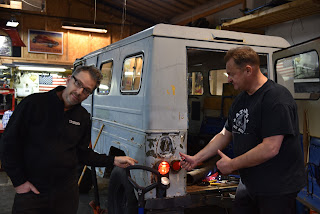 Eventually, they busted the beast and we all saw the light. As Magnus once said; -It's good to know Kirchhoff law, but when it comes to car electrics...exorcism comes in handy. 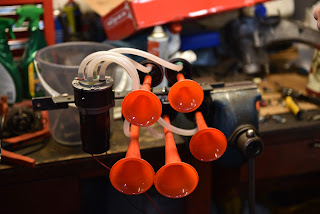 According to Kalle, no proper Military vehicle should be without Dukes of Hazzard horns. Since it's peacemaker. 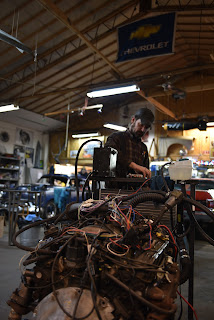 At some point, with all electric ghost gone, Magnus took the chance and cranked up the 5,2 Dodge V8. Successfully! 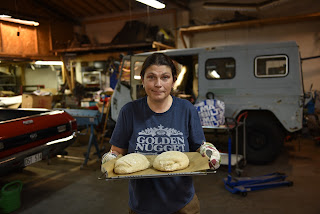 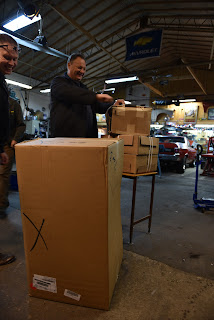 During a pandemic it's important to stay happy. Speed parts makes people happy. Kalle's early Christmas cheered up us all! 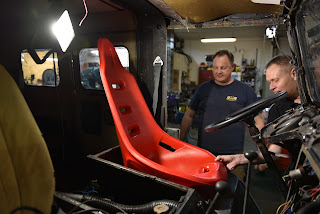 Epilogue: I've been working with cars and bike for basically, ever. But it was a really long time since I saw something like Ulf's sheet metal show this Sunday. In addition it became clear that hot chicken wings and opposite car guys souls can with joint forces chase evil electric ghost...OUT!