In eBay's Temptation land. Where dreams can come true and Chrome is Shiny.

Ulf's words was pounding my brain.
-You cannot expect to find the stuff you need when you want them, if you're working on a 1949 Oldsmobile Rocket 88.
- You've got to buy whatever pops up on eBay that fits your Olds when its available. Not when you need it. Those two will never match.
I was not looking for a front bumper. It was not needed at this point in time. Then suddenly; It was there. Straight. Shiny. No dents. A journey in temptation land had began. An intensive need was building up.
You know you're lost. That there's only one way out and that route goes through Paypal. You're try to fight back, be ignorant, pretend that you comfortably can wait for next time, for the next bumper arrive on ebay. In a couple of years or so.
For a while you might even be successful trying to forget what you've found. But at some point in time the crave takes over. Suddenly fingers are moving quickly over the keyboard. You're fully focused. Determined. Accept, Accept, Accept.
Then suddenly. Your order is in! A warm feeling of Victory arrives. Seconds later the anxious waiting begins.
I went through all of the above a couple of weeks ago. The outcome? See below. 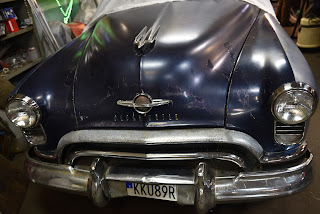 The old bumper has been used for close up park assist for many years. 71 years to be precise. The former owners always known exactly where there local curb stones and road sign has been positioned. Or at least where these were positioned. Now, it's in need of Tender, Love and Care. 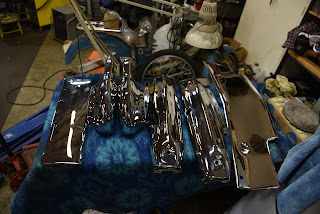 After restless waiting, after nights full nightmares that include lost gods announcement the eBay Treasure arrives. This time it was shiny as silver and in perfect condition. Like kids at Christmas Eve, Carina and I started to work on this Meccano for grow ups at once. 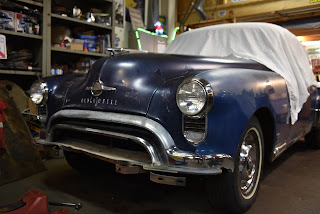 Bumper off. At this point in this time, Magnus offered a solid front and leaf springs end free of charge. Just to point out that there is always a Gasser option. 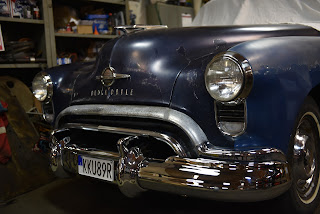 Again, not needed at this point in time. But straight, no dents and soo nice.
Yes I know, the grill bar got less shiny now.
Yes, you've guessed it; I found a new one on...eBay...
Posted by Hakan at 2:50 PM