There are all kinds of dogs. Big and small. Those who are annoying and the less annoying type. But dogs can do good things too. They can catch rats and help blind people. They should be recognized for that.

In addition, these critters normally have owners too. They vary on a liberal scale. The most liberal have a kind of Darwin approach. Which serves most of these animals just fine. Freedom is highly appreciated among dogs too. Not necessary responsible freedom, but still freedom.

So why all this doggy talk? We've got a garage dog. At first, it appeared to be a medium annoying dog in medium size, but after a while Chicco, - The Dog's name is Chicco- showed useful skills and proved to be a bad to the bone Hot Rod garage snoop.

The skill; he can detect misfire better than any other instrument. What? 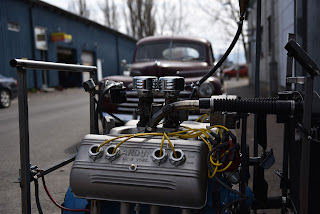 It was time to run the Blue Ardun V8 again. Now equipped with a new Aluminum Oil Pan and several treads sealed.
In the background; The patient that will get new heart.
Before start; a silent street at Ringön, Gothenburg. People drinking coffee in Saturday chitchat mode.
After start; Excitement. Coffee stains on shirts, ringing ears. Happiness.
As said, excitement was in the air. Few were in analytic mode.
I was euphorically running around. Looking for traces of oil. Sniffing after smoke. In vain.
Due to a liberal introduction to garage life, the little bastard, I'm here talking about Chicco The Dog, is able to detect cylinder individual air/fuel ratio and misfire. He just point his dog nose toward the exhaust pipe with the poor combustion and nod his little doggy head when the misfire is gone.
Can he do V12? Nobody knows. So far he's only done Ardun V8 Engines.
Disclaimer: No dog nose vs. fast lambda sensor correlation done so far.
It all might be a wishful thinking.
Posted by Hakan at 1:41 PM