Victory is counted sweetest by those who never succeed. That what she wrote. Two hundred years ago. I'm here talking about Emily. Emily Dickinson. Dead poetess.
Over to Bonneville Speed Week 2021. Since we're stranded in Sweden, we followed every move that the amazing Scandinavian Street rod race team did this year at Bonneville Speed Week.
It's not only because we couldn't participate at Speed Week ourselves, it's because these guys are our friends. In addition to that, we're interested from a technical stand point too, since we matched and delivered the EFR turbos for their Ardun V8 equipped P38 belly tank. The first turbo belly tank ever? The fastest wheel powered Ardun V8 engine? Most certainly the fastest BorgWarner EFR Turbo equipped Ardun V8.
Since we were not there, we forward the story from the team (Erik, Ruth and Rick) [remark: I added some clarifications for people who are not familiar with landspeed racing]

"Eric worked super hard on the roadster and we ran it at El Mirage a couple of weeks prior to Bonneville Speed Week  At that time Ruth ran a record run putting 1 mile on old record.

Eric pulled motor out and went threw it completely. Up pulled heads and did valve job 3 times to get the best results on leak down. That dammed flathead engine just leaked.

Eventually, when got to Bonneville and it's all about Ruth because we all really wanted to her get a 200mph club membership (red hat) and a speed record in her class.

She ran a 194mph (312km/h), so we went to inspection. Eric pulled the spark plugs on right cylinder head and found one to come out hard. He knew right away the cylinder was hurt. Engine passed Tech and Ruth got a record but motor was hurt badly. Done.

Next day was my turn. So we went out on the track Monday 9th of August and ran 213.476mph at line 2. We went to inspection for four hours and everything looked good. No complains. Went out next day early in the morning to go for the record. Then I jumped on it too hard and manged to spun at 1st gear.

Wednesday 11th early morning; I ran a 231.57mph (342km/h) lap and after the run we celebrated with high fives at return road, went to timing tailor, got our ticket and asked if we had to be back to Tech in an hour for inspection.

-You have as much time as you want.

So we watched Montana Dodge Boys break our record in same class but since we got our record first, we could get the hat, have it in books and go to banquet anyhow.

Well, when we got back to Tech I pull the valve cover off...and managed to hit fire bottle wire...and the bottles did go off... gezzz...they pump engine then the official came over and says; -You guys were15 min late to Tech you gotta leave...

So back at it again. Put everything back together, remove fire bottles from Ruth's roadster and go back out again. In that afternoon cars were spinning out and I were sitting in car for 2 hours at 100 plus degrees F (38degC) at lane 1, the long course,

Early morning next day; Back in the car. Ran super straight with an a egg on gas pedal. I was super easy on accelerating with very smooth shifts and reached 243.21mph!

Well now we're back in California. Ardun motor still runs fine, but we're pulling it out so can clean everything up and inspect it. Erik has already started working on Ruth's flathead...El Mirage race is coming up soon!

Nevertheless, What a Speed Week! Two records and one hat with this amazing team! 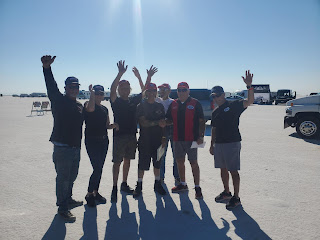 That special moment, when the red hat is handed over (a record over 200mph) and a lifetime 200mph membership is yours. A really happy team! 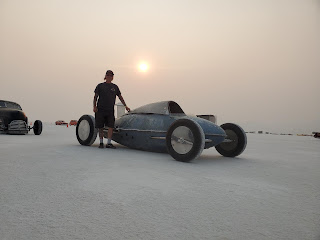 Rick and the Ardun + EFR turbo equipped P38 belly tank on the salt.
Ruth's Roadster in race ready mode before the race. 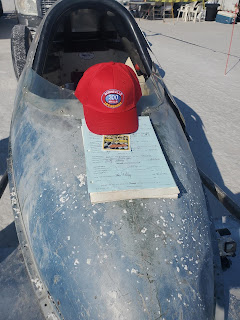 The hat, the record and the race car on a surface of salt.
The final target. 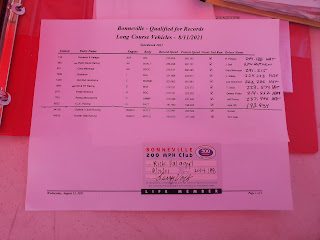 The 200mph membership card. Something that doesn't come for free. 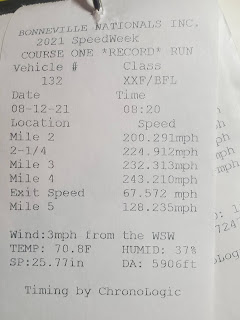 The kind of speed ticket that you really want to have.
Overall, we're so happy for Erik, Rick and Ruth who  got two new records, one more 200mph membership and an unforgettable Bonneville Speed Week 2021.
As we at Salt Slush Racing team follow this success story, we get even more exited to experience that post pandemic moment when we can fly over US of A, dust off our Amazon Land Speed Racer and eventually go racing again!
Posted by Hakan at 3:02 PM