Make no mistake; they are both car guys. There's a car aspect in every essential part of their life. They can do whatever to all system in a vehicle and fix whatever. If existing these guys would get top grade in any eBay /Blocket or Tradera exam.
In addition they tend to hoard exiting rare car parts and they always lack space that can cope with the the latest project.
On top of that, they always have a new project idea or a new dream car to catch.
So are they alike? Nope.
One of them, let's call him Mr. Stock want to find the ultimate rare stock Volvo Amazon in a barn. Why not a green Volvo Amazon 1962 Station Wagon in almost nice condition?
Then we have Mr. Hot Rod. He get's a bit nervous when a vehicle is all stock. Even though he get a positive feeling as he finds hundreds way to make modifications to the vehicle in question, a stock car gives him the creep. He thinks, not natural.
In the Salt Slush garage/workshop we have two extremes and some in between stock and modified. The other day, when Peter the Professor (Mr. Stock) bought another Volvo Amazon the different personalities came to the surface. 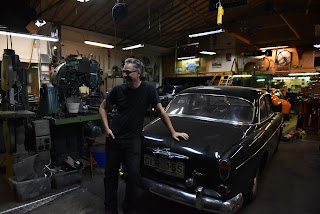 While Mr Stock was concerned about modifications and repairs made previously...
...Mr. Hot Rod (Magnus Börjesson) in a fraction of a second flipped up a folding ruler to find out if his friend, a OM605 Mercedes engine and Airwerks S200SX-E turbo, would fit the engine compartment.
-It will be difficult, but some cutting in firewall...then it might fit, he concluded calmly, while you could see fear and unease in Mr. Stock's eyes.
Now finally, we like cars in stock condition too, but at the same time it's an amazing experience when the old slow ride get some breathing support and manage to produce some positive speed and power fear.
As most of you know, we have tested to add 800hp to a Volvo Amazon.
Take my word, it became a very different car...exiting.