It's was finally time for our Amazon to wake up!

Suddenly US was open again. On November 8th, EU citizens got green light and open borders. Carina and I had tickets waiting, a trip pending and a well prepared mindset.

Meanwhile, we had stuff in US in need of attention. So...we took our bad conscience, our crave for Americana and the obvious Salt Slush need for future speed and set of to California. On arrival we found what we expected, i.e. our Landspeed Amazon and the Big Block Burb sleeping under car covers, possibly developing various technical diseases from not moving.

Luckily, our search for sun and wish to travel reduced our technical worries. Consequently, we had thoughts like;

- What could possibly happen to a 27 year old car that has been sitting outside for two years? Basically nothing.

- Is it likely that a race car, built by the Salt Slush Team could deteriorate after driven on wet salt back in August 2019? I guess not.

As expected that was all wishful thinking. 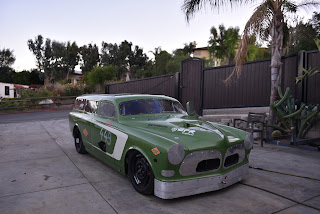 As the sun set on the first day, Erik helped us to tow the Amazon to the outdoor workshop spot surrounded by Palm and Pomelo trees. 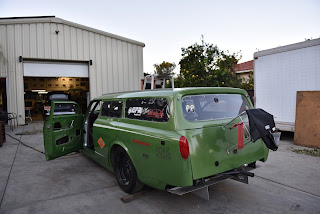 We looked at the car. Rather starred. Thought about coming race seasons, tried to remember what to do, checked the fluids then called it a day

Next day it was about time. To start up. Sun was shining. Excitement. Ignition switch on. Milliseconds later a buzzing high pressure fuel pump. Finger on start button. Starter motor engaged. Then some first unsteady combustion...then we woke up the neighborhood. Happiness. 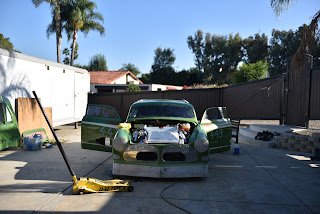 After that the work could begin. Working outdoor in under a clear sky and the warm sun in late November is nice. Really nice. 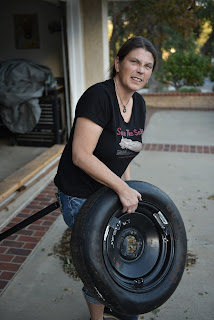 The tires were in need of pressure. While Carina needed some exercise. A match in heaven as it turned out. 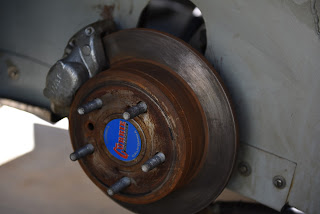 After a couple of hours working with emery paper, the brake discs were cleaned from salt driven rust. On advice from Erik, we phosphated the discs too. 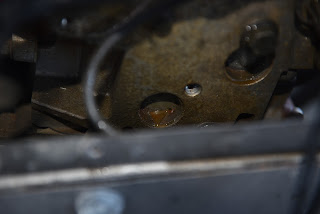 We had been running the engine for sometime and we were just about to start the celebration...when Carina noticed a small pool of water developing under the vehicle. After examination we could confirm that an expansion plug in the cylinder head had a small hole. The solution? JB Weld applied from the drivers seat in a very awkward position. Caused by grain of salt? 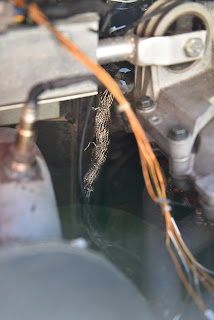 Then we found cables that had seen some heat. Carina checked them, fixed them and wrapped them with some heat protection and now it looks OK. The copper cables pictured? That's the decoupled cables to cylinder individual temperature measurement. 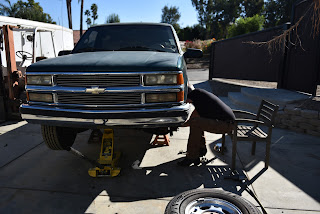 We needed to change brake pads on the Suburban too and remove some salt rust here too. 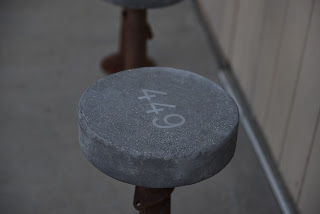 After a lot of work in the sun, Erik's and Ruth's hospitality was really welcome. To start with, Erik had made a bar stool with Amazon race number 449 imbedded. Really cool. 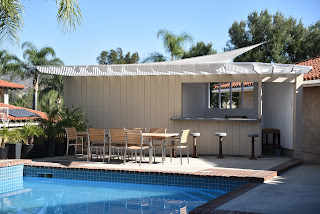 In addition, he had made a bar for the bar stools. 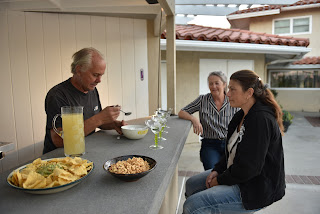 Ok. We've got designated places to sit, a bar and fantastic company. Anything missing? Not after Erik arrived with 1,5 liter margarita based on lime fruits picked from the garden. At this point in time, technical problems were getting smaller...
Posted by Hakan at 12:33 AM