What's old, what's new and what's cool? Some people want new stuff because it's new, others want old stuff because it's old, while some others study what's in front of them and try figure out how a certain machine can be used, updated, and raced.
If you need serious power in your ride, an LS engine with turbo or supercharger is an obvious alternative. We've done that journey. Our 6 cylinder, 3 liter Landspeed Race Amazon produce 850-900hp (crank) (183 cubic inch) which means 300hp/l. Only a slightly modified (new conrods) modern engine structure can support that.
But if you want modern driveability and reliability from an old engine, consider an upgrade of fuel and ignition. It's really amazing to experience how an old engine characteristic changes when these systems are modernized.
Here's what; We took our old 303 Oldsmobile Rocket engine apart, cleaned it, measured all parts and renewed what was worn. Then we added a Holley EFI Sniper (2 barrel TBI) and a Ignitor, (breaker point replacement kit) to the engine.
In order to debug the engine and transmission we borrowed a home made trolley from Magnus and fired it up. Result? Well, it started in 3 seconds and were running at reasonable Air-Fuel Ratio at once with almost perfect throttle response. When the coolant temperature reached a threshold the engine idle was stabilized at 850rpm and it started it's self learning journey and soon the engine was running at a Air-Fuel Ratio of 13,5. 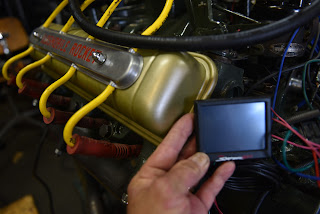 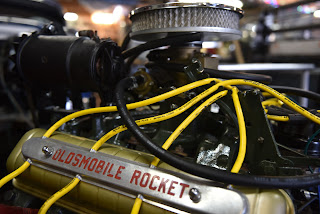 But that's just a golden carburetor isn't it? Nope it's a Holly two port TBI that looks old school. The only thing we needed to add was a oxygen sensor (closed loop lambda control) a coolant sensor and a high pressure fuel pump.
First cold start.
As the coolant temperature reaches working temperature and the fuel starts to evaporate in a good way, the warm idle is stabilized on preset values and the engine sounds and acts more like a much more modern engine.
Conclusion? Give the old engine a second chance. Stay conservative. But apply new technology to make it usable, driveable and reliable.
I'm still thinking about how a low boost (AirWerks S300SX-E equipped) 454 big block engine with...let's say 0.7 bar/ 10psi boost pressure would behave. Should provide 750hp without too much modification.
Anyhow, a test report will follow. Full of Rocket Science. For real.