The emotional rollercoaster in a workshop. Exemplfied.

We've all been there. We've all grabbed for a cold beer after a day of accomplishment. Comfortably been climbing Maslow's Pyramid only to look at the grand view from the top.

But as you're balancing on the top, you know where it all is likely to go next. Let's just say that the direction is south. To a place where heating cost is likely to be low.

When you're dwelling in this southern inferno, where celebrations are few, you know that you've reached rock bottom. From here on, it can only get better.

One sunny Sunday I took my Ford -46 Coupe to the Salt Slush workshop to check the rear brakes. I put the car on jack stands and thought to myself; this might take an hour.... 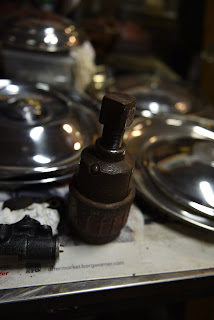 Pictured; One out of three different Ford drum pullers that that did not do the job. I took step after step down the stairs towards the emotional hell, where there's no reward and no cold beverages. 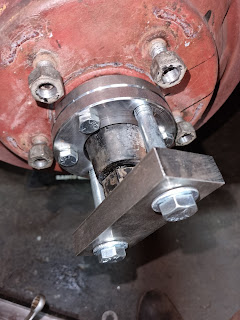 But when you're standing in hell the only way is up. So...I ordered a drum puller from the US of A  A puller that felt like really good technical solution. 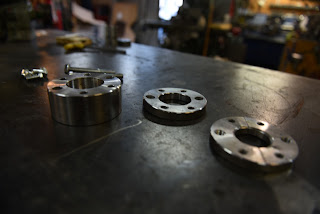 It was a step in the right direction and one out of two drums came loose. But still, the golden brew stood safe in the fridge. The technical concept was however correct, but reinforcement was needed. I went over to the a neighbor workshop and bought a 100mm steel shaft and made a stiff ring. 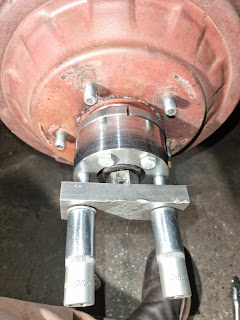 Will this work? Yes! Combined with an impact wrench from hell and a substantial sledge hammer, success was reached. 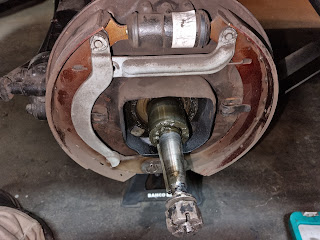 Epilogue: After a first naive assumption an inevitable journey downwards followed. Tears were flowing. Tools were ordered. Disappointment led to action. Action that were successful. Eventually.
Now I'm sitting here feeling just fine.
The glass in front of me is empty but still cold.

I wonder were things are going next? Let me guess...
Posted by Hakan at 2:23 PM